One of the dynamics we see in present-day America is the worship of belief itself.  This is nothing new since faith is the “substance of things hoped for, the evidence of things not seen.”  It’s hard to trust in what you can’t see.  Trusting in trust may be tautological, but it’s also a natural development for something that evades proof.  If it goes too far, however, such religion becomes an idol.  Its teachings become secondary to its very existence.  Its rules, no matter how contradictory, must all be followed.  And those who believe are encouraged not to think too deeply about it since, if they did, this inherent inconsistency would be obvious.  The knee-jerk reaction of “the Bible says” is one such defensive measure.  I saw this all the time while teaching in seminary. 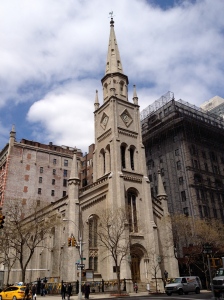 The other day I heard the melody of “Faith of Our Fathers” playing on the local church bells.  Interestingly, this is a Catholic hymn adopted by Protestants.  It’s kind of an anthem to this idea of worshipping the faith rather than the deity to which it points.  Consider the chorus: “Faith of our fathers, holy faith!/We will be true to thee til death.”  Originally a celebration of martyrs—those who found the courage to die in their steadfast belief—the hymn survives into an era when the perils besetting what used to be Christianity are less political and more scientific.  We live in a universe compellingly explained by science while politics has appropriated religion and counts on it to keep worshipping faith as an entity, regardless of distorted beliefs.  The hymn plays on.

Many public intellectuals are wondering about how evangelical Christianity could so easily divest itself of Jesus’ teachings and accept Trumpism.  Some have already begun to suggest that Trumpism is a “cult.”  (Religionists would say the proper term is “New Religious Movement,” since we no longer judge religions, no matter what forms of mind control they might prefer.)  The problem with experts on religion is that anyone can claim that sobriquet, bona fides or no.  Some of us have documented decades of official study of the phenomenon—those who paid attention in seminary and continued to pay for many years for a doctorate in this elusive field—but we’re are easily outshouted by those who take the words of this hymn literally, as they were meant to be taken.  Martyrdom comes in many varieties.  As I listen to the bells, I consider the implications.