Chaos is a monster.  More than personal opinion, that’s a biblical view.  If, like many modern people with theological training, you’ve been taught that Genesis narrates a creation out of nothing, you’ve become a victim of this monster.  You see, although ancient Israel had no “systematic theology”—the Bible can be quite inconsistent if you’re willing to read what it says—the view that chaos was constantly lurking outside the ordered realm of creation was a common one.  One of the more intriguing episodes in Ugaritic mythology involves a broken text where the god Hadad, aka Baal, refuses to allow a window in his palace.  The reason?  Apparently he feared chaos (in the form of Yam, the sea) might slip in and kidnap his daughters.

More than a theological statement, the story of creation was actually a singular episode in Yahweh’s ongoing struggle against chaos.  Step outside and look at the sky.  If it’s blue it’s because there’s unruly water being held back by a great dome over our heads.  If it’s gray, it may be raining, or it probably will be soon.  Stroll to where the land ends.  What do you see?  Water.  That water is lapping at land, trying to take it over.  Although the ancients didn’t have geologic ages (the Mesopotamians came close, with ancient kings living thousands of years) rivers eroded land and they had tendencies to flood.  The thing about chaos is that it makes you start again, from the beginning.

One of the many unfortunate things about biblical literalism is that it loses sight of this biblical truth.  It exchanges something everyone can understand for a theological abstraction that makes no sense in the world that we experience.  Ancient belief held that the human role in the world was to fight chaos, not to get to Heaven.  In fact, in the Hebrew Bible there’s no concept of Heaven at all.  Instead, the commandments were all about order.  You can’t build on the water.  What you do build water tries to wash away—Israel has a rainy season, and one of the characteristics of such seasons is the occasional violent storm and heavy rains.  Although we need the water from the heavens, heavy rains cause, well, chaos.  In ancient thought, this was the monster hiding in plain sight.  That blue sky is a reminder that a dragon awaits.  Rather than starry-eyed Heaven-gazers, the ancient biblical person was a monster-fighter.  And that’s the biblical truth.

Things represented on the Internet are not always what they seem. Removed to the back-bench of academia, I don’t have the opportunity for research that I once had. Every now and again, however, I still like to see what people are saying about Asherah. When I check the popular goddess books available off the shelf, my book on the subject is not often mentioned. At least on the Internet some researchers seem to have noticed it. A recent search for Asherah on Google, however, brought some surprising results. The first item of interest was a quinoa-based, organic veggie burger from Asherah’s Gourmet. The Asherah in question here, however, is simply a woman’s name. As a vegetarian I thought I would put a word in for the product, in any case. I found this brand at a health food store last week, but miles from home and with an air temperature of over 100 degrees, I was afraid the frozen products wouldn’t make it home without half baking in the car. 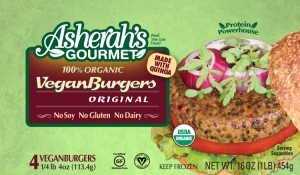 My next stop on the web was Sacred Suds. This New Age-themed site offers hand-made soaps, many of them associated with goddesses. The product entitled Asherah is named for “the Canaanite mother goddess” and is made with milk and honey. The website doesn’t actually state anything about washing away sins, but it seems difficult to go wrong by washing with a goddess. Another selling point—also not on the website—might be to point out that Asherah is known as the one who “walks upon the sea.” There is even a scene in the Baal Cycle from Ugarit where she is presented as doing her laundry in the sea. Asherah and soap, it seems, are a natural match.

One final product seems to be biding its time, although I suspect there is a market for it. The Asherah action-figure, privately made, does not appear to be commercially available yet. Garbed in an Egyptianizing cobra headdress, armed with a cobra staff, this heroine looks to be a suitable partner for Captain America, bringing the United States and Middle East together in an attempt to bring peace to a troubled region. Maybe heroes can accomplish what gods apparently can’t. 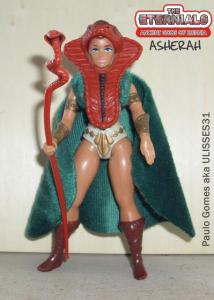 Not exactly big business yet, nevertheless Asherah appears to be on the move. Maybe once she breaks into the big time, those of us who’ve tried to make a living on her cape-tails might be dragged out of obscurity as well. In the meantime, it is about time for a veggie burger and a luxuriant bath.

Baal has been on my mind lately, despite the limited time I’m able to dedicate to research. You see, Baal and I share a common interest in weather. One of those people whose moods synchronize with the atmosphere, I have always felt what the sky projects. So when a colleague asked me to lecture his class on the Baal Cycle, I felt it was a kind of catharsis after all the gray skies and snow we’ve had this year. Baal, or properly Hadad, was doyen of the skies. In modern perspective it is often difficult to realize that the seasons and climate of ancient Aram were quite distinct from our own. Whatever came from the sky came from Baal.

In the documentation we have on this god, we find him particularly associated with thunder, lightning, and rain. These were more common in the Mediterranean basin than the snows of the higher elevations. It stands to reason, however, that Baal meted out the weather to the denizens of Ugarit, no matter how wet or cold. Even his daughters’ names reflect their meteorological roles. Thunder and lightning may be the most dramatic expressions of divine power, but nothing makes you shiver like a good snow.

It is difficult not to take the weather personally when my long commute days are permeated with ice and snow. Continuing a pattern initiated last spring semester, my lengthy drive to Montclair has been accompanied by snow each class session I’ve been assigned so far this semester. Even the students have begun to notice. One co-ed asked why it always snows when I’m teaching. Meteorologists may have their naturalistic explanations, but somewhere deep down, I’m afraid that Baal has it in for me. It’s time to go and shovel the front steps again.

Last night I finally got around to seeing Alice in Wonderland, the Tim Burton version. As a child I don’t recall having seen the overly optimistic Disney original, and I only read Lewis Carroll’s two-part, disturbing original after I had finished my undergraduate degree. When I first discovered Wonderland I was in one of my periodic phases of questioning reality and Carroll’s provocative prose and ingenious lyric ability only made the inquiry more complex. Strangely, it felt as if I had rediscovered a missing piece of my own childhood.

Burton’s versions of childhood stories would likely have been my preferred fare had they been available when I was young. Eerie without the overt horror of an R rating, the vision is one of a world where uncertainty reigns supreme. Then came the hookah-smoking caterpillar. It has been a few years since I’ve read the book, but I don’t recall the larval character as having a name. Linda Woolverton, the screenwriter, presumably gave him the name Absalom. Supposing this to be nothing more than the reassignment of a fated biblical name associated with failed attempts at kingship, I simply let the reference pass. Until the chrysalis scene. There he was, Absalom hanging from a plant, just like David’s son swayed from a tree according to 2 Samuel. This mysterious scene in the battle of Ephraim Forest had captured my attention before when I wrote an article on Absalom, eventually published in the Journal of Northwest Semitic Languages.

Noticing the strange phrase that Absalom was suspended between heaven and earth, I suspected that this might be a reflex of the ancient morning star (Venus) myth. The story of Athtar, the god who would be king but who must decline the throne, is a brief tale preserved in the Ugaritic Baal Cycle. As I watched the sage caterpillar giving wise advice to a confused Alice, the name Absalom took on new significance for me. I have no way of knowing if the reference was intentional or not, but in a culture deeply suffused by the Bible it would appear to be a logical guess. And if I was correct in my article, I was seeing a cinematographic reference to Athtar as a blue caterpillar last night. Wonderland indeed. 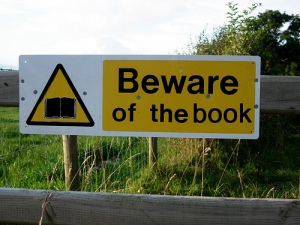 It’s Banned Book Week again. Each year the American Library Association promotes free thought by raising awareness of books that have been, or currently are, banned. Having just exited ABE books’ Weird Book Room (among the currently featured: Paint it Black: A Guide to Gothic Homemaking, The Bible Cure for Irritable Bowel Syndrome, and Is Your Dog Gay?), it is easy to see how the morally squeamish might wish that some books had never been written, but being a firm believer in personal expression, I give them a rousing cheer. Odd ideas are also among the Lego blocks that build our world.

I also ponder the texts with which I have spent so much time, and wonder what the ancient censors would have done with the great classics of antiquity. History’s first great novel, the Epic of Gilgamesh, would certainly have been on their crushed clay list. On only the second tablet we read, “Enkidu sits before the harlot. The two of them make love together… For six days and seven nights Enkidu came forth, mating with the lass. Then the harlot opened her mouth, saying to Enkidu: ‘As I look at thee, Enkidu, thou are become like a god” (Speiser’s rather tame translation). A sex scene with the first woman Enkidu ever met? We can’t have our kids reading that! Where do you put the V-chip in this tablet?

Perhaps the people of ancient Ugarit would have fared better? Their epic tale, the story of the trials and ultimate triumph of Baal, includes his unfortunate defeat at the hands of death. Baal is ordered to the underworld. “Mighty Baal obeyed. He loved a heifer in the pasture, a cow in the steppes of death’s shores, seventy-seven times he laid with her, she let him mount eighty-eight times.” Whoops! Hope the kids weren’t reading that. Surely this is some kind of sacred marriage ritual with Anat and not a cow? Good thing we never figured out where KTU 1.10 fits into the cycle! There’s another one for the rock crusher.

It’s a good thing the Egyptians were more civilized. Their culture would never allow for such liberal, naughty writing, would it? Well, maybe if we ignore the Memphite Theology. Not for the shy, here we are told how Ptah brought the Ennead into being using just his fingers.

I started reading the Bible as a child. To my surprise, it would not have gotten away with a G rating either. It seems to me that books deal with the greatest complexities human beings face. Sacred books as well as secular delve into the darker grottoes of the mind, and here the Bible is clearly among them. If we had systematically destroyed all written work that had offended others throughout history, we wouldn’t even have the Good Book left to argue about.