A project at work has made me curious about Christian Science.  Oh, I know the basics, as many religionists do, but when trying to find a neutral treatment of the tradition I was struck by how little was out there.  It is a symptom of academia, I fear, to ignore that which isn’t conventional.  I’m fascinated by what are called New Religious Movements (NRMs)—many of which have sprung out of some form of Christianity.  New religions never cease to emerge, but the nineteenth century was a hotbed of new faith explorations.  The Mormons, Jehovah’s Witnesses, the Shakers (started a little earlier, now extinct), Christian Science—these traditions hold fascinating beliefs and even though some are thriving (Mormons), others seem to be slowly dying out (Christian Science).

Photo by Kentaro Toma on Unsplash

While in Boston as a student I made a point of visiting the Mother Church of Christian Science.  The campus is impressive and architecturally pleasing.  I took a tour and I still remember the vast and impressive map room.  The denomination is having difficulty because, I suppose, of lawsuits against parents refusing medical treatment for children.  This puts their theology at odds with the larger society’s understanding of children’s rights.  Indeed, if you look for books on Christian Science the most prominent are those from people who’ve left the religion.  Many NRMs have become extremely secretive and some have tried to make leaving difficult.  The same, however, could be said for mainstream Christianity.  We tend to think moderate Christianity benign, if benighted.  But all religions possess the power to abuse.

Religious beliefs make people behave in unconventional ways.  I think of how politics in this country is dominated by a biblicist agenda.  It doesn’t matter which party is in power, it’s the material with which we have to work.  The beliefs, from any quasi-objective point of view are strange.  The Bible, for example, says nothing of abortion.  Life in the biblical world began with the first breath.  Their concept of conception didn’t involve eggs and sperm.  In other words, it’d be ill-advised to take your biology lessons from the Good Book.  But this single issue drives many thousands of voters to one particular party.  I don’t know about you, but I would think that few topics deserve more thorough consideration than religion.  It’s what motivates people.  Instead, we live in a fascinating array of beliefs, often merging official teaching and personal experience and when we try to investigate we find a dearth of interest.

I’ve always appreciated New Jersey inventiveness. This is a state where lottery winners register with the social security numbers of dead people to avoid taxes. Politicians and honest folk both seem to resort to inventive means of getting around the system. A recent article in the New Jersey Star-Ledger brought this home. An uproar has developed, it seems, over a more stringent regulation concerning religious exemptions for vaccines. If the bill passes, parents and guardians opting out of vaccines for their children will have to state their religion and the cause for the objection. Many have been suggesting this is government of the worst kind, because, well, it wasn’t really a religious reason that they used the religion waiver. Have you met my dead relative? He recently won the lottery.

A timeless problem that arises from a situation such as this is the issue of defining religion. We’re not really sure what it is, other than a reason for not preventing disease. Experts disagree about the essential components of religion. Since the concept of God is up for grabs, doing what pleases said deity (or not, depending on whether a religion has a deity) would seem to be part of it. Most religions, whatever they are, suggest honesty is a virtue. And honestly, most religions have no trouble with vaccines. The paper even had a helpful chart of religions, even indicating that Christian Scientists and Jehovah’s Witnesses have no issues, really, with vaccines. Clearly some churches do. One suspects other may have had such regulations, but they eventually died off.

Since we can’t bother to define religion, it becomes a most convenient excuse for just about any kind of deviant behavior. Many religions exist; more than most people even suspect. Sects of Christianity alone number around 40,000, and that’s leaving aside all other religious traditions and their many splinter groups. Truly held religion, as the media often underscores, can lead to extreme behaviors. The only way to come to grips with this is to try to understand what religion actually is. The most logical locus for such study would be universities. Many of them are run by states. States that are afraid of breeching that wall of separation. Even in the cause of public health. In my opinion, funding the study of religion could be a real shot in the arm. But then, so could winning the lottery.

Within a few blocks of my office is Midtown are at least three temples related to the New Thought movement. New Thought has been variously interpreted, but generally it is considered a religious movement, challenging, as it does, the very perceptions of reality itself. New Thought is usually traced back to Phineas Parkhurst Quimby, a nineteenth century American philosopher and inventor. A watchmaker by trade, Quimby came to believe that mind had ultimate reality and New Thought opined that the divine is true human selfhood, and what we call God is ubiquitous. One of the corollaries of this outlook is that the mind is capable of healing the body. A woman who was a patient of Quimby took his ideas and developed them further. Mary Baker Eddy would eventually found the Christian Science movement. Although the Mother Church of Christian Science is in Boston (and is a somewhat imposing building), over on East 43rd Street in New York stands the First Church of Christ, Scientist. 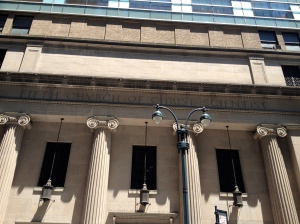 New Thought was noteworthy in that many of the leaders of the movement were women. Unburdened from traditional Judeo-Christi-Islamic ideas of paternal divinity, New Thought had no use for male-centeredness. One of the early leaders of the movement was Emma Curtis Hopkins. Originally a disciple of Mary Baker Eddy, Hopkins split off from Christian Science and began to organize the New Thought movement. One of her followers was Ernest Holmes, the founder of Religious Science. While based in Los Angeles, Religious Science had roots in New York where Holmes spent some of his younger years. Holmes would eventually write The Science of Mind and his followers would become recognized as another New Thought “church.” While on a lunchtime errand I came across the Religious Science center on East 58th Street, just a few blocks from its kin down by Grand Central. 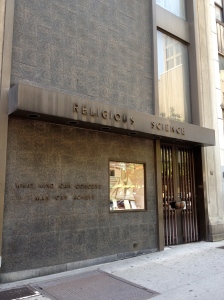 Theosophy is probably better classified as an esoteric religion rather than New Thought. What ties them together is their beginnings in the late nineteenth century in the Northeast. Helena Blavatsky and Henry Steel Olcott began meeting in New York City and the movement grew out of their mutual interest in the religions of antiquity and the far east. The Theosophical Society moved its headquarters to India with a main US office in Wheaton, Illinois. Nestled between the Church of Christ, Scientist and Religious Science, an office of The Theosophical Society sits quietly on East 53rd Street.

One brief lunch hour will take you past all three. These New Religious Movements attest to the vitality of religious thought. Some of them continue to try to combine science with the world of the mysterious, spiritual universe in which we find ourselves. The obituary for religion was written long ago, but a stroll through Midtown on lunch hour will show it was certainly premature.