I’ve always appreciated New Jersey inventiveness. This is a state where lottery winners register with the social security numbers of dead people to avoid taxes. Politicians and honest folk both seem to resort to inventive means of getting around the system. A recent article in the New Jersey Star-Ledger brought this home. An uproar has developed, it seems, over a more stringent regulation concerning religious exemptions for vaccines. If the bill passes, parents and guardians opting out of vaccines for their children will have to state their religion and the cause for the objection. Many have been suggesting this is government of the worst kind, because, well, it wasn’t really a religious reason that they used the religion waiver. Have you met my dead relative? He recently won the lottery.

A timeless problem that arises from a situation such as this is the issue of defining religion. We’re not really sure what it is, other than a reason for not preventing disease. Experts disagree about the essential components of religion. Since the concept of God is up for grabs, doing what pleases said deity (or not, depending on whether a religion has a deity) would seem to be part of it. Most religions, whatever they are, suggest honesty is a virtue. And honestly, most religions have no trouble with vaccines. The paper even had a helpful chart of religions, even indicating that Christian Scientists and Jehovah’s Witnesses have no issues, really, with vaccines. Clearly some churches do. One suspects other may have had such regulations, but they eventually died off.

Since we can’t bother to define religion, it becomes a most convenient excuse for just about any kind of deviant behavior. Many religions exist; more than most people even suspect. Sects of Christianity alone number around 40,000, and that’s leaving aside all other religious traditions and their many splinter groups. Truly held religion, as the media often underscores, can lead to extreme behaviors. The only way to come to grips with this is to try to understand what religion actually is. The most logical locus for such study would be universities. Many of them are run by states. States that are afraid of breeching that wall of separation. Even in the cause of public health. In my opinion, funding the study of religion could be a real shot in the arm. But then, so could winning the lottery. 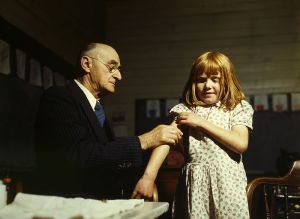