Among the progeny claimed by Wabash College is Dan Simmons. I’ve read a couple of Simmons’ ghost novels, although in reverse order. I read A Winter Haunting, which I quite liked, and followed it up with Summer of Night. Having lived in the Midwest many years, it was easy to visualize the scenes. Then came the time for my trip to Crawfordsville, Indiana. I started the day in South Bend, finishing up my meetings at Notre Dame. I’d noted on the map that, as is often the case, the places I need to get to just aren’t connected by anything resembling a direct route. Although the forecast said “30 percent chance of rain,” I’d awoken at 4 a.m. to a thunderstorm and it had been pouring all morning long. I could swear they were making plans to convert the great Notre Dame stadium into an ark. Perhaps I’d forgotten just how persistent Midwestern storms can be. Soaked, I crawled into my rental car to tool down to Crawfordsville. At least the rain had finally stopped.

On one of those highways in the middle of corn fields as far as the driver’s eye dares look, the low tire pressure light came on. I dutifully pulled over and called Hertz. The suggestion was to find a gas station and put some air in the offending tire. Someone could be there in three hours. Looking about me at the amber waves, I thought of the spirits of Dan Simmons’ stories. A car breaking down in the heartland. No one around to offer assistance. The illusion allusion was shattered when a stranger pulled over and asked me if I needed help. I recall a priest friend once tearfully confessing to me that he had, on a rainy night, refused to stop to help someone with a flat because of fear for his safety. I understood completely—it can be a scary world out there. “And likewise a Levite, when he was at the place, came and looked on him, and passed by on the other side.”

With multiple stops to put air into my slowly leaking tire, I limped my way from town to town, reaching my destination after dark. Along the way a fierce rainbow appeared to the east as the sun began to set. Once you’ve abandoned the interstate in Indiana, there’s no going back. I began to notice just how many churches dotted each little village through which I drove. Samaritans, I thought. As I write this in Crawfordsville, I think of the corn, sorghum, and soybean fields that inspired Dan Simmon’s ghosts. I think of a stranger, a woman of minority demographics, stopping to see if I needed help along a lonely highway. She was among those our society would deem vulnerable, and yet she was the only one who stopped. And I think of parables. “But he, willing to justify himself, said unto Jesus, And who is my neighbour?” 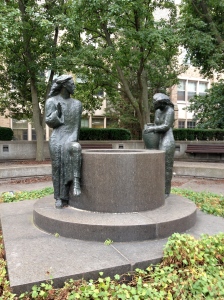