It’s a strange kind of vindication when you see someone argue your ideas independently.  Even if they understand those ideas in a different way.  I suppose it’s necessary to say that in academia those who have university posts are assumed to be more authoritative than those of us who don’t. That’s not sour grapes, it’s simply a fact.  Some years ago, after having first seen Christopher Nolan’s The Dark Knight, I wrote a post on this blog suggesting that the Joker functioned as a shaman in that movie.  Being a blog by a non-university academic, the post had a few readers, but it is not peer-reviewed and therefore, officially just a matter of opinion.  I have studied religion professionally for decades now, however, and I would still stand by my assessment. 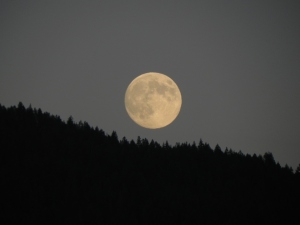 Recently I came across an article that argued Batman was a shamanic figure in that same movie.  It was affirming that another academic had come to a similar conclusion, however, we differ in our interpretation of who bears shamanistic characteristics.  It doesn’t help, I suspect, that shamanism isn’t well understood, and even the name is a bit of a misnomer.  We don’t really have a word for non-major religious practitioners of indigenous populations who may have little in common, so we call them shamans.  Their religious systems are too specific—“granular” is the favored business word these days—to categorize them easily.  And the reason for this is that we think of religions in the light of the large, organized conglomerations that arose in western Asia a couple millennia ago.  It’s difficult to make room for smaller exemplars.

Something larger religions have done is distorted the idea of religion as a local phenomenon.  Communities used to reflect the religious experience those who lived in them knew.  Catholicism divided the world into parishes and even tolerated some differences between them.  Protestantism gave Europeans (and their New World descendants) a set of choices, and towns in America often sport many steeples not because religion draws a community together but rather because it generally tears it apart.  Hierarchical religions are about as opposite of shamanism as Batman is different from the Joker.  They may have similar ends in mind, but their methods are quite different.  The shaman is a figure that leads to spiritual wholeness for the community.  Their methods seem questionable to larger, highly structured religions.  And the unaffiliated trickster may accomplish more than an establishment figure in a local setting. 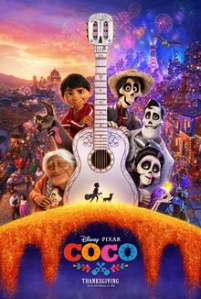 In America’s ever roving commercial eye, Día de Muertos has become an extension of Halloween.  Retailers have realized that people will spend a lot on their fear, and the autumnal holidays delve into that primal territory.  Since the Day of the Dead, being a mix of indigenous Mexican religions and the Catholic celebration of All Souls’ Day, comes two days after Halloween why not blur them together with greenbacks?  So capitalist thinking goes.  While certainly not free of monied interests, the Disney/Pixar movie Coco has the virtue of addressing Día de Muertos as the separate holiday that it is.  A form of ancestor worship—a religion extremely common around the world—the thought-world of the film shares in common with Tim Burton’s Corpse Bride this idea that the afterlife is colorful, if not joyous.

I realize I’m jumping the gun here, but I just saw Coco for the first time over the weekend.  Not just a culturally sensitive treatment of an indigenous holiday, it is also a celebration of music.  In a very real sense, music is life in the film, and even the dead continue to thrive in its presence.  Again, the connection with Corpse Bride suggests itself.  The key difference, from a religionist’s point of view, is that Coco is based on, to an extent, actual religious traditions.  An irony of this is that, together with the worship of Santa Muerte, the focus on death sometimes makes the Catholic Church nervous.  Focus should be on resurrection, not death.  But what if death isn’t seen as evil?  Where is thy sting?  This can be a real challenge when your organization is offering escape from death.

The fear of death is natural enough.  It’s the ultimate unknown.  It fuels both religion and horror.  In that sense films like Coco that show a joyful aspect of the hereafter do an end-run around traditions that base their wares on ways to avoid the consequences of death.  Hell becomes a threat to be avoided—the forgotten dead in Coco face annihilation, a fate that Héctor notes comes to everyone eventually.  Eternal torment isn’t in the picture.  I have to wonder if this view doesn’t present a form of salvation that is unwelcome among rival religions.  Although Catholics don’t have the hostility toward Halloween that many Evangelicals display, there is a challenge of rival faiths here.  Stores have already begun offering this year’s Halloween wares, and increasingly among them are Day of the Dead decorations.  The holidays are quite distinct, although related, and movies like Coco suggest what we fear may be more a matter of perspective than of the decree of an angry deity.

The problem with monsters is that they’re not easily reduced to a lowest common denominator. This becomes clear in an article about the under explored (from a western perspective) monsters of Australia. Christine Judith Nicholls, in “‘Dreamings’ and place – Aboriginal monsters and their meanings” (sent by a friend), describes many of the scary creatures of the outback. The article title references Dreamtime, a kind of aboriginal journey that ties into indigenous Australian religion. The division between imagination and reality isn’t as wide as we’re sometimes taught. (More on this is a moment.) Nicholls’ article demonstrates that many of these monsters impress on children the dangers of wandering away from parents. Indeed, that is clearly part of the socializing function of monsters. The question, however, is whether that’s all there is to monsters or not. (Nicholls doesn’t use reductionistic language—she does note this is a psychological explanation.)

In an unrelated article in The Guardian, by Richard Lea—“Fictional characters make ‘experiential crossings’ into real life, study finds”—researchers suggest that fictional characters seem to appear in “real life” from time to time. All those who read fiction know this phenomenon to a degree. Just because someone is completely made up doesn’t mean that s/he doesn’t exist. Since our minds are the ultimate arbiters of reality, fictional characters and monsters may indeed be “real.” This isn’t to suggest that physical, flesh-and-blood imaginary beasts lurk in the dark, but it isn’t to suggest that they don’t either. Reality is something we haven’t quite figured out yet. The more we think about it, the more it appears that both hemispheres of our brains contribute to it. 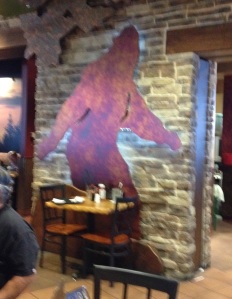 When the morning newspaper raises alarm after alarm about the frightening tactics of the Trump administration the temptation is to give up to despair. That’s not necessary, actually. Reality requires our consent. Imagination can be a powerful antidote to the poison spewed by politicians. What fictional character—or monster—might step into a situation such as this to make it right? If the power of millions of smart minds were concentrated on such a being, would it not become real? Friends have suggested over the past four months that the arts—creativity—are going to be especially important in the coming years. If we are to survive evil we’ll have to use our imaginations. That’s something that the aboriginal peoples can teach us, if only we’re willing to believe.