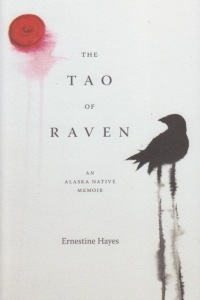 Just twenty pages in and I was reflecting on how Christianities and the cultures they cultivated have caused so much suffering in the world.  Assuming there is only one way to be, and that way is pink, European, and monotheistic, has led to so many displaced people thrown aside as collateral damage.  Ernestine Hayes’ The Tao of Raven is a remarkable book.  A native Alaskan, Hayes participated in the colonialist venture of higher education to try to also participate in the “American dream.” If this book doesn’t make you feel uncomfortable in your own skin, I don’t know that you’re human.  As I mentioned in a recent post, I have a deep interest and lasting guilt to learn about indigenous peoples of the country where I was born.  About the culture that is so Bible-driven it can’t see the human beneath.  The capitalism that takes no prisoners.

The Tao of Raven is one of the most honest books I’ve ever read.  Hayes refuses to sugar-coat the alcoholism, the broken promises, the poverty offered to native Alaskans.  Even as Trump’s final rages go on, he has opened the Alaskan Wildlife Refuge for drilling, to the highest bidder.  Apart from those whose wealth will increase as a result, we will all suffer.  Those who lived in Alaska before the colonists arrived the most.  The idea of colonizing, without which capitalism just can’t work, reveals its evil here.  When a voice like that of Hayes is able to make itself heard we cannot but feel the condemnation.  When over seventy-million people vote for a hater, we all tremble.

The book ends much as it begins.  A sincere regret for those who’d been fed the contradictory messages of missionaries.  Those told to accept suffering on earth so that they could go to the white person’s Heaven, while those inflicting the suffering lead comfortable lives with modern conveniences.  The double-standards that allow people to die on the street like dogs.  The double-standards that can’t see that you need not be Christian to upend the tables of money-changers.  Indeed, the last time someone dared to such a thing was two millennia ago.  When Christianity slipped its fingers between those of capitalism a monster would surely be born.  The cost would come in human lives, even as a quarter-million lay dead in this country from a virus a rich man can’t be bothered to address.  Do yourself, do the world a favor.  Read this book.  Read it with your eyes open and learn from Raven.