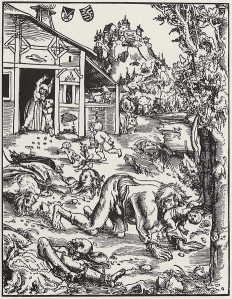 It must be incredibly difficult to write a truly scary song. I don’t mean the kind of scare that most heavy metal can innately deliver, but I mean the kind of thrill that a classic horror movie gives. I’m constantly looking for the movie that can recreate the chills without getting blood all over the carpet. Music, however, soothes the savage beast. I remember when Michael Jackson’s Thriller came out. Now, nothing about Jackson’s musical style shows any hint of being scary. It’s too upbeat. In the end the ghost will be a mere reflection in the mirror, and the zombies will fade with the sunrise. I had some people tell me back then that it gave them the chills just listening to it. Amateurs. A couple weeks back I wrote a post on Radiohead’s “Burn the Witch.” It’s kind of scary, but it doesn’t keep me up at night. I haven’t heard Paul Simon’s new album Stranger to Stranger, but when I learned from NPR that it has a track called “The Werewolf,” I knew I’d eventually add it to my growing stack of MP3s.

Like Thriller, the musical style of the song isn’t inherently scary. The organ in the final minute is pretty effective, though. What’s scary about “The Werewolf”? The lyrics. Simon is, to this child of the sixties, the foremost lyricist of his genre. Rich, complex, nuanced, his words tell a story and that story is scary. While I prefer my werewolves with different baggage, it’s pretty clear that like most shapeshifters the werewolf stands for hunger. There’s violent rage, of course, but like the wendigo, hunger drives those who can’t fulfill their desires in human shape. The Howling, for example, shows how lust can make a werewolf. There is a lust more dangerous than that of the flesh, and that is the greed that leads to societies with one-percenters who just can’t stop eating.

When we see Trump-clones who pay no taxes at all, due to the good that being uber-rich offers the economy, we should listen for howling in the night. Too many an April has rolled around where those of us called “middle class” stare in wonder at just how large a cut our government takes. The werewolves don’t wait for October to come around. No, those who are hungry eat all the time. I don’t find Simon’s music to be particularly scary. The tempo is upbeat and his voice just can’t feel threatening. Still, I’m shivering after listening to “The Werewolf” even though the shortest night of the year is fast approaching on padded paws. 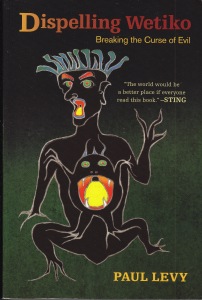 Books don’t tell us what is true; books tell us what could be true. When I was growing up, under the influence of the Bible, I thought that non-fiction books were the truth. I came to understand that people disagreed about the truth, but it took a long time before I realized that books were merely the attempts of their writers to argue their version of the truth. If someone knew the actual truth that person would be a god. These thoughts came to me as I read the fascinating and mystical Dispelling Wetiko: Breaking the Curse of Evil, by Paul Levy. In many ways this is a mind-altering book. For one thing, Levy has made me reconsider how real evil is. Looking at what’s going on in the world it is increasingly difficult to deny the reality of objective evil. Levy’s book gives it a name and even attempts to analyze whence it comes. He calls it “wetiko.”

For several years now I have tried to find information on the monster known as the wendigo. Wetiko is a version of the same word, and it was this that drew me to Levy’s book. The wendigo is a shape-shifting creature that preys on humans. It is mentioned or featured in a few fictional books, and most recently featured in an episode of Sleepy Hollow. Since most academics don’t treat monsters seriously, it is difficult to find accounts of the beast. It is often discussed as a fictionalized version of cannibalism. It is a monster always hungry. The more it eats, the hungrier it becomes. It is this aspect that leads Levy to use it as his main metaphor for evil.

The evil that Dispelling Wetiko focuses on is the extreme selfishness our society has come to embrace. For example, our entire economic system is a fiction propagated by the ultra-wealthy. By defining a fiction as valuable and making it available to everyone else by a system of debt, the one-percenters keep everyone else, literally, in thrall to them. There is no gold to back up the fictional value they claim they have, and yet they consume others constantly in their evil greed. In a nuanced argument Levy suggests that this evil is real. Becoming conscious is the only way to combat it. There’s so much going on in this book that it has to be read several times, I’m sure, to get it all figured out. As I finished this one, however, I thought I had read a book that may actually be true. 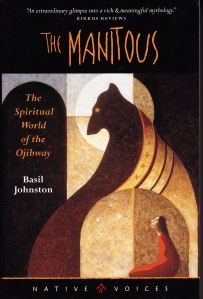 One of the yearly autumnal rituals we’ve established is the watching of Escanaba in da Moonlight. It is a silly, crude, and profound movie that revolves around Native American lore—namely, the creature known as the bearwalk. Despite the high level of interest in monsters on the internet, the bearwalk continues to be elusive. Robert C. Wilson wrote a novel, Crooked Tree, about this Ojibwa legend, but academics have seldom explored it. The few resources I found pointed me to the wendigo. Wendigos are frightening spirits of the forest, sometimes presented as skinwalkers, or shape-shifters, who prey on unwary human beings. Some writers call them werewolves, but this isn’t exactly correct. Frustrated at finding no solid information, I picked up a copy of Basil Johnston’s The Manitous: The Spiritual World of the Ojibway. Johnston, who is Anishinaabe, writes to preserve the heritage of his people.

Manitous don’t have a direct equivalent in English. Some have been inclined to designate them as gods or spirits, but they inhabit that strange realm that overlaps with humans as well. The Ojibwa viewed the world as more animate than western science allows. People were part of this larger universe, but were not the sole end of intelligent life. The tales in this book map out an unseen territory where manitous may be found in lakes and streams, in the hearts of trees, in the early prototypes of humankind, and yes, in the wendigo. The wendigo (also spelled windigo or weendigo) is a representation of excessive acquisitiveness. They often begin life as humans, but become cannibals. As they eat other people their hunger grows, along with their bodies, and they cannot be satisfied. The more they eat the more their hunger remains. They are, therefore, extremely destructive, roaming the woods seeking human victims.

Throughout The Manitous, Johnston gives little in the way of editorial comment. One of his stories is a parable for the coming of Europeans and their subsequent treatment of Native Americans, but most of the tales are of the natural world. The wendigo occupies the last chapter of his book. Before putting the matter to rest, however, Johnston makes a poignant and valid point. Although the Ojibwa no longer believe in a literal wendigo, the treatment of the earth by corporations has taken its place. Always hungry, excessively greedy for more to be taken from the earth, industrialists have made the wendigo look as if it were an amateur slaughterer. Living lightly on the land, the Native Americans tried to take only what they needed. Europeans, on the other hand, created new things in order to keep the hunger going. And those who constantly create new needs grow wealthier and wealthier. Instead of naming this inherently destructive system the wendigo, we call it progress and happily invite it to live among us.