I spend a lot of time thinking about monsters. Could there be any more statement of the obvious? The deeper issue, however, is why. Why am I, among countless others, drawn to the monster? This may not be politically correct—I apologize in advance—but that which is unusual naturally draws our gaze. Humans, along with other conscious creatures, are curious. (There’s another trait that reductionism hasn’t adequately explained; we’d be far more secure sticking with what we already know works.) The out-of-the-ordinary will keep our attention although we’re told not to stare. The monster is defined as something that isn’t “normal.” We’re captivated. We stare. Indeed, we can’t look away. 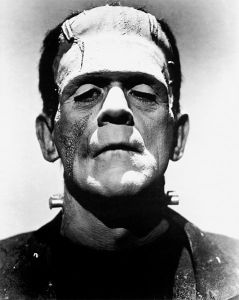 The media play into this with their coverage of Trump. I realize I risk participating in that rude behavior by even addressing the topic, but as I hear intelligent people everywhere asking why Trump has captured the imagination I have to ask, have you seen the headlines? Newspapers that don’t endorse him run huge headlines when his name is in the news. It’s horrible, but I can’t look away. Historians scratch hoary heads and wonder how Hitler came to power. Populism combined with an undereducated population in a democracy may be an equation that political analysts should try to solve before it’s too late. Meanwhile, my thoughts turn to monsters. Ugly, large, and threatening, they rampage through my dreams and now my waking reality. I watched in horror as the electorate lined up behind Reagan. Bush, I told myself, was an aberration. Until the second time. Then I realized it was the summer of Frankenstein indeed.

From my youngest days I recall the antipathy that my classmates showed toward school. I didn’t mind school that much, or at least the learning part. Gym I could’ve done without. I never did get the socializing thing down. Feeling a bit like Frankenstein’s monster myself, I realized I was a pariah (that was a vocabulary word). When did monsters shift to being worthy of emulation? The monsters of my childhood were to be feared, and curious creatures will always keep an eye on that which causes fear and trembling. The media say we don’t want Trump but they give him all the air time he could wish and more. In headlines in massive, almost misshapen letters. They’ve expended their superlatives on what they tell us we shouldn’t see. They have, perhaps unwittingly, played into the very hand bitten by that which it feeds. I can’t help it. I’m staring.