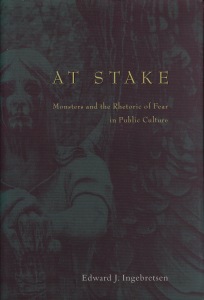 Edward J. Ingebretsen is one of the most intelligent analysts of monsters about. That may seem like a small order, but it’s not—many people write about monsters, and Ingebretsen is one to whom attention is owed. At Stake: Monsters and the Rhetoric of Fear in Popular Culture is not an easy book to read. Narratively sophisticated, it takes on some issues we’d rather not have addressed. One of the great myths about monsters is that they’re all for fun. The current understanding of monsters gives the lie to that worn adage. Monsters tell us something extremely troubling about ourselves and we don’t like to have someone pointing it out. When hearing that some of the monsters considered are Jeffrey Dahmer and Susan Smith, the prospective reader might wrongly assume why. The monster may not be whom one expects. Indeed, Bill Clinton makes his way into the discussion, as do Andrew Cunanan, O. J. Simpson, and Matthew Shepard. Be not quick to judge, however; you must pay attention.

As most writers on monsters recognize, religion often fuels them. Without belief monsters have no power to scare. We’ve probably all seen horror films that underscore this point. If a creature is unbelievable it loses its ability to be frightening. The movie invariably ends up in the B category and is appropriated for laughs or for an example of how not to make a film. Ingebretsen knows that to understand monsters we must understand ourselves. We too often allow unspoken prejudices (which are sometimes nevertheless shouted aloud) to inform our opinions of what is deviant or evil. Just look to Washington and see if you can disagree. The more we tease these monsters apart, the less they conform to expectations.

As implicated by his title, a great deal is at stake in coming to grips with monsters. They aren’t just for childhood Saturday afternoons anymore. It may be that they are one of the healthiest means for dealing with the steady stream of fear flowing from the District of Columbia. Without our metaphors, we are lost. Those set on destroying monsters have no concept of just how terribly helpful they are. You can’t be sure who the beast is, they are so very protean. They will, however, get you through some dark nights. Not without scars, but wiser, if a touch more melancholy, in dawn’s cold light. Take monsters seriously. It’s the only way to survive them.

One thought on “Know Your Monsters”