Old interests don’t die so much as they become sublimated.  As a child I picked up a cheap “gem display” in a small cardboard box at a yard sale, probably for a quarter.  A couple of the samples were missing, and those that remained were tiny, but I was fascinated that rocks came in such varieties, especially since the ones I tended to find on my own were all shades of gray.  Science education wasn’t especially great in my small town, and besides, I had a massive interest in not going to Hell, so religious study took precedence over my predilections toward scientific studies.  Still, as a child and later, I read a lot about science and I never doubted that it could teach us about the natural world.  Years later I rediscovered my love of rocks.  I joined the Wisconsin Geological Society.  I bought a rock hammer.  I began hounding.

One of the first truisms you learn about life is that movers don’t like heavy things.  Seems that if you are in the business of helping people move (for money, no less), you might be stoic about such matters.  But I have yet to move and not have the guys complain about all those boxes of books.  Well, the rock collection is even heavier.  I discreetly marked the boxes “heavy collection,” hoping nobody’d say “What you got in here, rocks?”  Because, well, yes.  I like rocks.  While in Wisconsin the collection grew—we lived in a house at Nashotah, and we had space.  I had a rock tumbler going in the basement.  We attended rock and gem shows.  Then we moved three times in three years.  I became embarrassed of my petrine peccadillo. 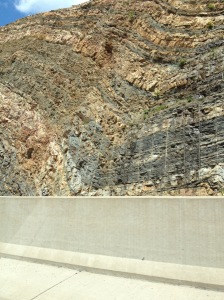 On my way out the door yesterday, I spied a fossil I’d picked up in Ithaca.  Immediately my old inclination to rocks returned.  I don’t know why I bought so many books on geology and seriously considered changing professions after my academic position fell apart.  Perhaps in a life so unstable rocks seemed solid, reliable.  Or maybe it was nostalgia for my young days when a cheap white box of neatly labeled specimens provided hours of transfixed wonder.  I still pick up interesting rocks, and even go to places where collecting is permitted.  This whole world under our feet is full of surprises and an interesting stone can send me into a reverie that is, if I’m honest, as spiritual as it is scientific.