Religion.  What is it?  Those of us with many years—or decades—of experience in it find ourselves asking that often.  A Raëlian I know pointed me to the documentary The Prophet and the Space Aliens, by Yoav Shamir.  Shamir is an Israeli film-maker who was recognized by Raël some years ago as being in sympathy with the principles of Raëlianism.  The result is this film, released about a year ago, and available in its entirety in the context of an interview on Vice, housed on YouTube.  It is well worth the watching, although be warned, it is NSFW (not safe for work), as they say.  I found the post-viewing interview of Shamir to be quite enlightening as well.  Shamir’s film itself is, of course, worth pondering. 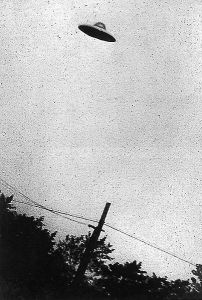 Raël, born Claude Vorilhon, began his career in France as a singer and then a journalist for a racecar magazine he founded.  In 1973, after a close encounter of the third kind, he founded Raëlianism, a movement of which he is still the leader.  While Shamir is not a Raëlian—indeed, he’s a non-religious atheist—his documentary treats Raël respectfully.  After giving an overview of the movement at the present time, following Raël as he goes about his daily activities and interacts with his followers on his estate, it then gives his biographical story and interviews some of the people he knew as Claude Vorilhon.  The documentary is balanced and addresses issues such as the movement’s proactive outreach to Africa and respect for African religions and its unconventional views on sexuality.  The issue of cloning, which came to a head in 2002 with the claim that a human, Eve, had been successfully cloned, is also covered.

What it truly striking about The Prophet and the Space Aliens is that it intentionally raises the question of how religions begin.  An originator, a prophet, gathers a band of followers.  Its beliefs are distinctive from other people and tend to outlive the death of the founder.  If it is strong enough the religion will go on to become a fixture in society, sometimes gaining influence and respectability.  One of the points Shamir makes is that if religions survive long enough they simply become part of the cultural fabric.  One of the most interesting scenes in the documentary is an encounter between Raël and Mormon missionaries.  Mormons are one of the more recent, successful New Religious Movements that has become mainstream.  When a member receives a major political party’s nomination for president, it’s obvious that the candidate’s religion (if any) has become accepted.  This documentary will make you think.