RadioLab (not to be confused with Radiohead) is an NPR program to which my wife likes to listen.  She’s introduced me to a few episodes since, as a person who does a lot of writing, I don’t normally gravitate toward programs with a lot of talk.  It’s part of the writer’s curse.  In any case, she recently played a segment on acoustic warfare.  I’ve known for some time that acoustic warfare is a thing, and that militaries use sound to disrupt enemies’ machinery and human operators.  I didn’t really know how it worked.  The interesting thing about this RadioLab spot was that they took the story of the walls of Jericho as a starting-off point.  Also of interest is that one of the hosts had never heard the story—something that would have been somewhat impossible for many growing up in my generation.  In case that’s you, however, the story goes like this—

God commanded Joshua to take on Jericho, a major, walled city, with a ritual procession and the blowing of trumpets.  After marching around the city several times, the priests blew their trumpets and the walls collapsed.  The story’s told in the book of Joshua.  The question discussed on RadioLab was whether it was possible to knock down walls with noise.  It is, they concluded, but at a noise level beyond the abilities of shofars.  This very discussion, however, raised any number of issues.  One is that the collapse of Jericho’s walls isn’t attributed to the rams’ horn sound, but rather a miracle.  Another is that biblical scholars and archaeologists have long known that Jericho wasn’t even occupied at the time of Joshua, and so the story isn’t historical. 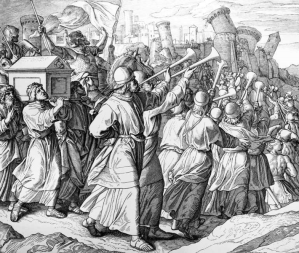 Those who produce educational materials on various media generally don’t consider scholars of religion as interesting or noteworthy speakers.  TED talks don’t feature a category for religion, and, as this RadioLab episode demonstrated, those who understand acoustics have more interesting things to say than biblical scholars.  It’s not so much a rude awakening as it is a confirmation that what has long seemed obvious is indeed true—biblical scholarship isn’t really of general interest.  The Bible, however, retains a certain mystique.  I struggle with this disconnect constantly.  While the Good Book remains an iconic symbol—divine, even—those who know it well have less to say than others who have scientific methods to apply.  Not once was it mentioned on RadioLab that pretty much no biblical scholar would argue that the story is historical, but then, what fun would that be to pick apart?