Running through the Midwest like a massive, erosive serpent, the Mississippi River has an unrivalled place in the American imagination. In many locations the relentless river has carved impressive bluffs over the millennia, providing impressive views out over the valley that has been carved in nature’s time. Down near the town of Alton, Illinois, along the eastern bluffs left by the sculpting waters, is a reproduction of the Piasa Bird. Years ago, while living in the Midwest, some relatives took me to see the replica, a local tourist attraction and not a bad place to watch for bald eagles. It was then that I first heard the myth of the Piasa Bird. “Bird” is a bit of understatement, or perhaps a misnomer. The creature was really a monster, by any description. According to the lore presented by the tourist literature, the Piasa was a flying, human-eating beast that terrorized the local Illini tribe. Unsure of what to do, the tribe was at a loss until Ouatoga, their leader, had a dream that revealed an ambush as the means of defeating the monster. 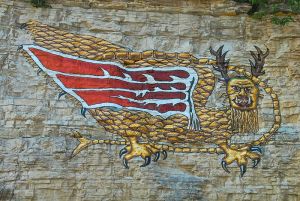 The ambush involved, as is often the case in folkloristic accounts, a victim. Someone had to be bait to draw the Piasa into the ambush of poisoned arrows that had been arranged. Ouatoga, aware of the obligations of leadership, volunteered for the role of the victim and stood in the open to lure the Piasa into the trap. As the monster swooped down on him, the warriors released their arrows, killing the beast and saving their leader. The story bears much in common with myths throughout the world: a frightful beast, a sacrifice, and ultimate deliverance. This framework also appears in many religions, outlining the human condition. It also reflects, in an abstract way, the ideal of pre-modern society; we are all in this together. Banding together against an outside evil, human society might banish the monster and everyone’s chances would be improved. It is the world of mythology.

In our enlightened society the emphasis seems to have changed completely. Our leaders are often our Piasa, snatching from the populace at will and maintaining uneasy control. Ouatoga, in the myth, understood the role of leadership as being willing to sacrifice everything for the good of those who were under his watch. The idea also occurs in the Bible where Ezekiel charges the ungodly kings of Judah with being shepherds who eat the sheep. I still believe in the power of mythology. Stories are preserved because of a truth that resonates with the hearers. Monsters are in no short supply, and a society that is subject to the whims of an oligarchy perhaps has the most to learn from our mythological past. When is the last time a public leader offered to give up anything in order to serve the populace who grants him (sometimes her) his power? Old Man River, he must know somethin’. Looking up at the Piasa, I think I might be able to guess what it is.