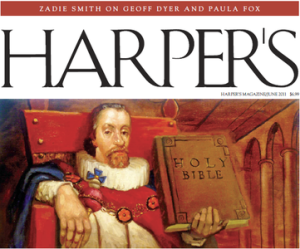 Celebrating the four hundredth birthday of the King James Bible, last month’s Harper’s magazine featured seven popular writers giving their take on various passages from the Bible. Noting the Bible more or less gave the English language its shape, this little exercise in eisegesis represents, in small measure, the power of the Bible even today. While many lament that America is no longer Bible-centered, with its misuse and abuse in the political arena the Bible still seems to be the heavyweight champion of the country, albeit altered through the eyes of certain key players. I was happy to note Harper’s chose novelists and poets to respond rather than theologians, biblical scholars, or—God help us—televangelists or politicians (frequently the same thing). What emerges is a tapestry that alike puts biblical scholars’ teeth on edge and makes fundamentalists wince.

Novelist Howard Jacobson looks at the creation story and takes the angle that God is a lonely artist. Writes Jacobson on the creation of light: “It’s good because it reveals an idea. The artist isn’t obligated to explain what that idea is.” Here, in the words of a non-specialist (can one say “amateur” of an accomplished novelist?) lies the heart of the matter. Art is creation and creation must be interpreted. Anyone who has undertaken a creative enterprise knows the feeling—the casual, disinterested glance at your work hurts. Any artist wants to be appreciated. Once the metaphor of God’s authorship of the Bible is recognized, there is a group of human artists hiding somewhere outside the annals of history. One of the great mysteries of the Bible is that we know very little about who wrote it (with the exception of Paul in the Christian Scriptures.)

The Bible is a work of art on a broad canvas. Today it is frequently criticized for the abuses it endures, but if we allow it its original purpose the view should become more sympathetic. The Bible was composed by individuals struggling with ideas. For millennia it served as a useful guide to the human experience until the church became politically powerful during the reign of the emperor Constantine. From that point on, deep knowledge of the Bible became power. For centuries the church guarded that power, keeping it in the hands of the clergy. Now that the Bible has become democratized, it threatens to take over democracy itself. Out there, somewhere unseen, the original artists are snickering as they chink their glasses and toast their accomplishment—they are writers who changed the world. But I suspect Paul is there too, warning them against partying too much.