I was walking in Ithaca, with my feet not far from Sagan.  Winter had settled in prematurely, as it often does in upstate.  I was wearing a hoodie and old fleece combo and I suppose I looked a bit tatty.  My wife and daughter had gone to see Harriet, but movies about how badly people have mistreated others, strangely for a guy who watches horror, really depress me.  Ithaca, until recently, supported three independent bookstores, so I figured I could pass the time easily enough.  It was growing dark and breezy, and I visit bookstores only with a list, otherwise it’s too dangerous.  Autumn Leaves, a used vendor, I’ve visited many times.  Their religion section is disappointingly small, but I tend to find offerings in other areas when I blow in.

Buffalo Street Books is the last remaining indie that handles new books, but I stopped by The Bookery, now closing, on my way.  This was saddening.  Ithaca houses both the ivy league Cornell and the highly regarded Ithaca College.  I suspect many of the street sweepers hold doctorates.  Has book culture entirely bent the knee to Amazon?  At the end of the last millennium, Ithaca housed 25 independent bookstores.  Today it’s evident that Buffalo Street (formerly The Bookery II) struggles to keep its hold.  I feel ethically obligated to buy something there, to take one for the team.  I had a short list and the shelves in The Bookery had been nearly bare.  It was just too depressing to stay there.  I found an inside bench and sat to read until the movie was over.

Or so I thought.  I ventured back outside and now it was fully dark, being six p.m., and I wandered back to the familiar Ithaca Commons.  I went into a couple of shops, but they looked at me as if I were homeless.  (I suppose I was, in a sense.)  I haven’t had a haircut in a while, and my beard is scruffy and white.  My hoodie and fleece don’t speak to affluence.  I had unconcealed books—I routinely refuse bags—and I suppose I could come across as a touch eccentric.  (I don’t have enough money to be authentically eccentric.)  I wondered how street people do it.  Outside the east wind was decidedly sharp and windbreaks on the pedestrian zone are few.  I came to the monument to Martin Luther King Junior.  I was walking in Ithaca but I really felt that books could make that dream come true. 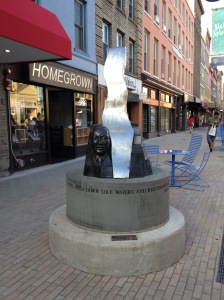