This is the dawning of the age of aquariums. With the Gulf oil spill still gushing out of control, there is a current awareness of the plight of the seas due to unnatural (i.e. human) interference. Perhaps that is why so many people flocked to the Mystic Aquarium yesterday. That, and the fact that it was a beautiful day on the northeast coast. Having grown up in land-locked western Pennsylvania, I have always appreciated the oceans and their microcosms, designed for human visitation. My first actual aquarium experience was the New England Aquarium in Boston, a facility that sets a very high standard for all others. Trips to the Seattle Aquarium, the Norwalk Aquarium, the Camden Aquarium, and a variety of smaller facilities (I unfortunately missed out when my family visited the San Francisco and Shedd (Chicago) Aquariums) always leave me with a sense of connectedness to our planet. Life emerged from the seas, and, as Rachel Carson observed, we always long to go back to our ancestral home.

It is easy to spend an entire day at the Mystic Aquarium. Beluga whales are impressive close-up, and the sea lions show more intelligence that your average Republican. Jellyfish, with no brain at all, are capable of doing tricks humans can’t – a tank of bioluminescent jellies was captivating. The penguins had a fascination all their own. It had been a few years since I’d been able to pet a shark or ray. In a separate exhibit on Deep Sea exploration, largely featuring Robert Ballard, the man who discovered the Titanic, the aquarium houses several robots used for entering regions uninhabitable by humans. Since my intense association with FIRST Robotics is never far from mind this was an unexpected bonus. The biblical aspect of the journey, however, came at the end.

Exhausted from a day of wandering, hot and lethargic, we came across the final exhibit: Noah’s Ark! I had begun to wonder if I’d managed to spend a day in an entirely secular venue when the Bible showed up. The display was about the Black Sea. William Ryan and Walter Pittman’s theory of the origin of Noah’s flood in the Black Sea deluge was showcased, along with a video of Ballard, Ryan and Pittman discussing their ideas. As I tell my students, I don’t find this theory particularly convincing – the flood story first emerged, it seems, in southern Mesopotamia – but it is an excellent example of the hold the Bible has on the western imagination. The Black Sea did flood, shifting from fresh to salt water; that discovery is fascinating in itself. In the western world, however, it somehow just feels incomplete without giving old Noah his own Nantucket sleigh ride. To find the origin of the story of Noah, a trip to any vantage-point along the ocean where the power of the sea is evident is all that is required. 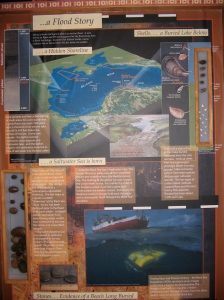