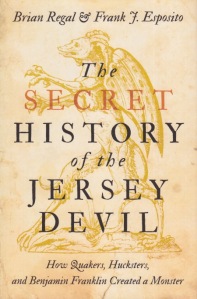 The Pine Barrens of New Jersey strike the first-time visitor as eerily odd, even today.  Stunted trees grow from sandy soil, crowded close together and growing hard up to the edge of the road.  You can see the sky above, but dwarf trees of uniform height block your lateral views over any distance.  It feels claustrophobic.  Add to this tales of inhospitable residents and an actual profusion of tree-climbing lizards, and you’ve got the grounds for wondering what else might lurk in the deciduous woods.  Brian Regal and Frank J. Esposito aren’t so easily frightened.  Their fascinating book, The Secret History of the Jersey Devil: How Quakers, Hucksters, and Benjamin Franklin Created a Monster is a bit of a chimera on its own.  The subtitle gives a pretty good idea of what you’ll find in the book.  For someone who had lived in Jersey for a dozen years, and who loves monsters, it was a must-read.

Not to provide too many spoilers, Regal and Esposito spend some time in colonial New Jersey sketching the little that can be known of the rather prominent Daniel Leeds.  Anyone from Jersey knows that its eponymous state demon is also known as the Leeds Devil.  This particular family had good connections despite being Quakers—a capital crime in some parts of the British Empire.  Daniel, however, had a falling out from the Friends and made his name by publishing an almanac.  This almanac and the proximity of Philadelphia to the Barrens brings Benjamin Franklin into the story.  Franklin competed with the Leeds almanac, and Poor Richard eventually won out in this war of the words.  Demonized by their former Friends and gently satirized by Franklin, the Leeds family was eventually all but forgotten.  Then stories began to emerge of a dragon-like monster in southern Jersey.

To get the details you’ll need to read the book.  Particularly interesting for this blog is the way religion and monsters interplay.  There’s a good bit of history of monsters in the story, including Quakers and early attempts among scientists to understand birth defects.  The very word “monster” is, in its “word cloud,” related to ideas such as revelation and portents.  Early scientists resorted to divine anger when they couldn’t explain what nature had wrought.  And of course folklore is a very potent lubricant.  There are some gaps in the story here, but this is an enchanting exploration of whence monsters might come.  The Jersey Devil has international fame now, and its birth may have begun with insults flashed back and forth among religious believers that eventually were taken literally.  The devil’s in these details.  Or at least in the spooky topography of the Barrens.