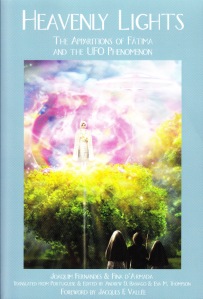 The events at Fatima in 1917 have occupied me on this blog before. Perhaps it is because of the haunting quality of the whole thing. Children, two of whom died young, saw a vision and the apparition made a prediction that was held in secret for decades. I’m not sure about you, but these days remembering most things for more than a few nanoseconds is a challenge. What was I saying? Oh yes, the Fatima incident. I recently read a book on Fatima, an unconventional book, but one which makes an intriguing case and raises a valid point. Heavenly Lights: The Apparitions of Fatima and the UFO Phenomenon by Joaquim Fernandes and Fina d’Armada draws compelling parallels between the many UFO reports that are in the public record and the strange events at Fatima, Portugal in the latter days of World War I. Immediately some people will be put off, since we have all been conditioned to ridicule the idea that, although there is almost certainly life in space, it would take the trouble to visit our neck of the universe. In the mantra of conventional thinking: it can’t be done. (Sounds rather like my career. What was I writing about, again?)

The valid point raised by the book is that many people are skeptical of the supernatural. That rules out a miracle for Fatima, since in a materialistic universe, miracles aren’t sanctioned. That leaves us with a crowd of at least 50,000 people, perhaps as many as 70,000, hallucinating at the same time. I mentioned this to a very bright college-aged student recently who responded, “Really? Who would believe that so many people saw the same hallucination at the same time?” That’s the official story, however, in the materialist camp. Just outside the tent are those who believe UFOs are material objects. They are in no way supernatural, just impossible (because nobody can fly fast enough to get here, what with light being so sluggish and all—and even if they could, why would they come here where we’re still pretty much all stuck to the surface of the globe?) I’m afraid I suffer from a surfeit of imagination. I like to wonder what might be possible.

The point Fernandes and d’Armada are making is that rural folk in 1917 had no language to describe what they saw apart from religious language. Interestingly enough, the children were always a bit cagey when saying the woman they saw was the Virgin Mary. They recognized that others said she was, but then, the others didn’t see her. The book does not explore the fact that UFOs and religion have a somewhat long association. That doesn’t make interstellar travelers supernatural, though, just out for cheap thrills. Buzz earth a few times and a century later people will still be talking about it. Some will call it a miracle. Others will say it was a mass delusion. And the rest of us will scratch our heads.