Here’s how messed up “America first” is.  As we’re forced to try to protect ourselves from a drunken, sexually abusive Supreme Court nominee, Indonesia is trying to recover from an earthquake and tsunami that have killed at least 1,400 people.  Of course, it’s “America first.”  The powers that be want us to buy their narrative that we only are important, the chosen ones.  You don’t even have to be non-American to be excluded.  Just ask the people of Puerto Rico.  No, it is far more important to railroad through an anti-abortion judge so we can cause misery to countless numbers of people in America first.  Natural disasters strike even here (Florence), and we can only glance away a moment from the constant drama being roiled in that ever bubbling swamp.  I thought it was supposed to be drained by now.  They did find some slimy choices for high offices, in any case.

This new form of Manifest Destiny is as bad as the old one was.  People are suffering from a terrible tragedy and our lips are chapped from calling our senators to try to get them not to vote for someone a vast majority of normal citizens find highly objectionable.  The Republican abuse of power is only overshadowed by its abuse of women.  When even Kellyanne Conway speaks out stating that we need to listen to the victims, it’s clear something is amiss.  How slowly they awaken, these creatures of the swamp.  “America first” looked like a party game for a while, but now that its true and ugly agenda is being shown those who climbed aboard that bus aren’t quite sure how to signal that they want off. 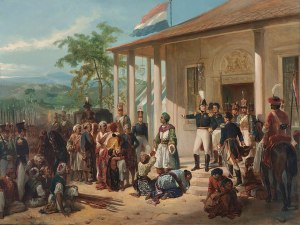 What of Indonesia?  What of a president who can’t even point to it on a map?  It’s not here, so it’s not our problem.  Nice drunken frat boys who feel up women are the best we can offer for the highest court in the land.  Elsewhere in the world they’re trying to address the global warming that is causing more and more extreme weather.  We can charge tariffs and still call ourselves Republican.  If we can’t start actual wars we’ll start trade wars.  You can’t be great until others bow before you, even if they’re bowed in grief for a natural disaster that claimed hundreds of lives.  We’ll make America first even if we have to fall into last place to do it. 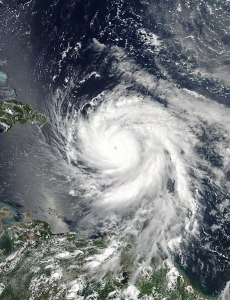 Three major hurricanes into the season and our Republican government has nothing better to do than try to think up new ways to take away our healthcare. In an effort—no victory is too insignificant—to show that the swamp is being drained, the Grand Old Party wants its own constituents to sicken and die off just to prove a point. Meanwhile Thurston Howell can’t find a charted island even after being marooned on it. Puerto Rico is a territory of the United States. Perhaps the White House should use some of its tax money to purchase a map and a history book. Houston is still recovering from Harvey and 45 spends his time campaigning for the loser in Alabama. Not even Shakespeare could have come up with tragedies like this.

Morality, at least in the post-Reagan elephant wing, used to be in line with evangelical Christianity. When I grew up in that tradition I was taught it meant fair treatment for all, regardless of race or social location. Since my childhood that brand of Christianity has become more exclusive, it seems. God now, contrary to the Gospels, rewards the wealthy. He tends to favor gentiles, but only those of caucasian stripe. Those who are poor and suffering should learn to speak English and stay out of the sun. Act like proper suburbanites and hurricanes will never strike you. Oh yes, and you need not fear being stuck by the sun by day either. You don’t even need to read your Bible. In fact, you can ignore it as long as you know enough to proclaim to others you alone know what it means.

So far 2017 has been a year of natural disasters. Earthquakes, hurricanes, and further from home, multiple landslides and monsoons. And even volcanoes. It’s tempting to see some biblical correlations here, but that’s playing fast and easy with the great torment from which our fellow human beings are suffering. Far more important is to show that we can repeal healthcare in a nation that has been spared, to a great extent, the worst the world has had in store so far this year. Oh, except for Puerto Rico. Does anybody have a map app on their phone? And while you’re at it, check to see if maybe some developer has come up with software to help govern an affluent nation. Preferably one linked somehow with Twitter. We mustn’t forget our priorities. 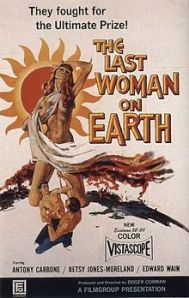 Roger Corman was famous for saving a buck on his movies. When it came to low-budget sci-fi and horror, he could be counted on to stretch pennies into dollars. The B quality with which this impresses most of his films makes them all the more addictive. I watched my share growing up, but I’m still discovering ever more as an adult. The Last Woman on Earth is one I recently found and the religious implications of the film were so obvious that they seemed worthy of a little exegesis. The plot is simple enough, three skin-divers, a man, his wife, and his lawyer friend, are the only survivors of an anoxic episode. When Harold Gern (the man) wonders what happened his friend Martin says, “A new and better bomb, act of God, it doesn’t really matter.” The destruction of humanity is a time-honored divine pass-time, so no one considers the statement blasphemous.

Naturally enough, within a short time Martin starts to feel that Harold’s claim on his wife Evelyn (clearly, by choice of name, an Eve figure) is a bit unreasonable under the circumstances. Biology is, in this instance, the misogynic element as the men increasingly step up their hostilities. Evelyn eventually decides to run away with Martin, but Harold is in hot pursuit. The entire episode takes place on Puerto Rico, and so there are a limited number of places to hide. Martin tells Evelyn to await him in the church, which she dutifully does. Harold catches up with Martin and blinds him. Martin finds his way to the church and when Harold comes in Martin provides a final homily (including some lines from Alice Cooper’s “School’s Out”) declaring that there is no more God. He then dies on the church floor.

The movie ends with Harold and Evelyn leaving the church to try to learn what life is all about. Reading up on the movie, I learned that Corman wanted to keep the costs down so that the writer of the script was cast as Martin for the film. The script wasn’t finished before they started shooting. Nevertheless Robert Towne’s story brings the overall trajectory back to an updated Garden of Eden story. Puerto Rico, a tropical paradise, where the one woman is Eve, is the scene of the first sin—the murder of Martin by Harold. Throughout the movie, Martin is clearly the Abel character while Harold is selfish, unsympathetic, and emotionally absent. Cain wins the epic struggle and God, we are told, is no more. Not the most profound of story-telling, but the themes and concepts are very much biblical. And when the final couple leave the church the remainder of world history is set to begin. I’d gladly give this one a B.