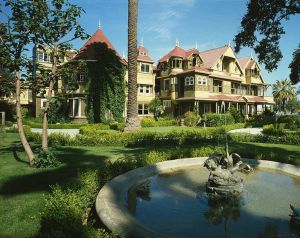 Sarah L. Winchester, it is said, was a haunted woman. The widow of William Winchester, she was heir to the tremendous amount of money brought in by sales of the renowned Winchester rifles. Fearing the haunting of all those killed by the weapons, she built what has now become a tourist attraction—an unfinished mansion that was intended to prevent those ghosts from living with her. With the spate of recent multiple shootings, we might wonder how many other gun manufacturers are living haunted nights in their comfortable homes. A recent petition has been circulating to stop Spike’s Tactical from producing The Crusader assault rifle. Predictably, the sales have been so overwhelming that the religious rifle is on backorder.

The Crusader, as the photos reveal, is emblazoned with Psalm 144.1 “Blessed be the Lord my Rock, who trains my hands for war, my fingers for battle.” It also features a Crusader’s cross and trigger setting labeled, Peace, War, and God Wills It. Blasphemy in carbon fiber. I suppose I’m hopelessly naive, not being aware that guns could be purchased online, but the overwhelming demand is nevertheless disheartening. It used to be that the Christians were the good guys. You certainly didn’t have to worry about them shooting you. That was the job of the heathen. So many multiple shootings took place this summer than I couldn’t keep track of them all. I live in a world where guns play no role and I wonder if everyone wouldn’t be happier if we didn’t lay down our arms and learn how to get along.

Of course, the Bible is a book where violence against enemies is permitted, and, in places, even encouraged. Society has repeatedly declared that there is no need for experts trained in how to interpret the Bible, and this is what happens. Psalm 144 is a poem for deliverance from enemies. Historical criticism would likely place the piece as written during a time of war. The era in which the majority of the Bible was written was anything but peaceful. Those parts of the Good Book that are particularly extolled are often those that suggest that the answer to war is peace and that setting aside your own will for the well-being of others is something we should all be doing a bit more often. But we cannot deny that “Peace, War, and God Wills It” aren’t part of the violent worldview we also encounter in sacred writ. I wonder what Mrs. Winchester would have had to say about such mixing of the Bible with guns.