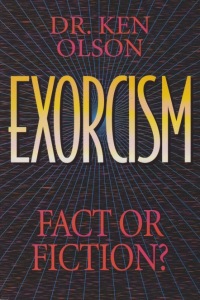 Usually it works like this.  I go into a used bookstore with a list of titles I’d like to find.  Yes, I know I can look them up on Amazon and pay some price gouger more than the book’s worth, but you sometimes find things forgotten on a shelf out of the reach of technology.  When I went into a used bookstore in the vicinity of Ithaca last month I didn’t have my list with me.  When I visit such a store, especially the first time, I don’t like to walk out empty-handed.  The word “Exorcism” on both the spine and cover of Ken Olson—excuse me, Dr. Ken Olson’s book on the subject, well, how could I not?  Exorcism: Fact or Fiction? is published by Thomas Nelson.  That immediately told me something of what the book would be like.  It wouldn’t be an academic treatment, and it would be somewhat evangelical.  Still, I didn’t have my list with me.

Olson hasn’t had an easy life.  His license to practice psychology was revoked after he performed an exorcism and my sympathies are always with those who have lost jobs.  Rejection is, after all, a form of violence.  The book, however, isn’t so much about exorcism as it is about evangelical views of it.  Written around the time of the satanic panic in the 1990s, the book takes seriously the claims of the alleged victims and also the physical existence of the non-corporeal Satan.  This actually leads to a few logical brick walls.  Referring to the body parts of non-physical beings can be an exercise in metaphor, but evangelicals tend to be literalists otherwise.  This discrepancy begs for discussion but receives none here.

The history of moral panics is interesting.  We live in the midst of them pretty much constantly now.  The internet doesn’t really help.  Moral panics are times when particular concerns spread rapidly (for which the web is ideal) without having any critical questions asked.  They often lead to a mob mentality that can victimize the innocent.  Although that’s clearly not his intent, Olson’s book tends to do this too.  If a victim is female, as is often the case, conservatives blame her for such things as abortions, forgetting, it seems, that a male was involved.  Since abortion scares are another example of a moral panic, it’s not surprising Olson treats them along with other forms of spiritual warfare.  Those who turn to the book looking for The Exorcist will be disappointed.  You might find a copy of that, however, at your local used bookstore.