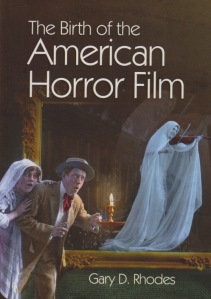 In both Holy Horror and Nightmares with the Bible I concern myself with horror films that have appeared since 1960.  I’m not enough of a cinema studies type to argue eloquently about the various stages of the horror genre on celluloid, but the many histories I’ve read settle on 1931, the year Universal’s Dracula and Frankenstein both appeared.  Dealing with more contemporary fare, I often use that as a mental benchmark.  Gary D. Rhodes has changed  that perspective, however.  The Birth of the American Horror Film is a somewhat sprawling treatment of a subject that’s more involved than I had supposed.  Early films didn’t suddenly appear, of course, and Rhodes spends some time surveying what came before the film that eventually produced what we recognize as cinema.  One of the things he notices is that which we call “horror” was pretty much there from the beginning.

Call it morbid curiosity.  While not everyone admits it, it is a pretty widespread human condition.  After surveying literature, theater, and visual culture, Rhodes moves on to consider many different genres of pre-1915 horror.  Some of them don’t strike every reader as horror today, but that’s a point I tried to make in Holy Horror.  The definition depends on the viewer.  Rhodes suggests throughout that American viewers tended to prefer non-supernatural horror.  While statistically this may be true, he devotes several chapters to genres that fall into the supernatural category.  These were, in the opinion of this reader, the best in the book.  One of the reasons is that horror and the supernatural naturally go together.  Many of us working in this field have noticed, some with embarrassment, that the two are closely related.

What might strike other readers as starkly as it did me, is just how terribly prevalent “horror” films were before there was a proper genre.  Rhodes makes the point that even if we like to think otherwise of ourselves, if there hadn’t been a substantial market for such movies they wouldn’t have thrived.  Some of them, like murder mysteries and other dramas, we might cast more as “thrillers” today.  I included a few of them in Holy Horror.  The real terror, however, often arises from subjects that were somewhat taboo in the late eighteenth and early nineteenth centuries.  Religion was handled with all seriousness.  I wonder if this might be one of the reasons that the supernatural didn’t appear, in the early days, as much as it would later.  This is one of those books that raises many questions such as this, and that makes me glad that the author is working on a sequel.