They’re going to look pretty ridiculous when this is all over.  Like sheep without a shepherd.  Evangelicals, I mean.  The fact is they’ve jettisoned everything they stood for to support a pseudo-president constitutionally incapable of telling the truth and now they must be wondering about what they’ve lost along the way.  Stories in “liberal” sources such as The Washington Post, The New York Times, and The Atlantic have raised the question repeatedly—why don’t Evangelicals hold Trump to the same standard they hold all other people?  His backing and filling have been obvious to anyone capable of thought, and yet the bestselling books in America for the past two weeks have been tomes about how the liberals are lying.  What’s an Evangelical to do when truth has lost its meaning?

While I was still an Evangelical, in college, we debated endlessly how to get at Truth with a capital “T.”  No matter how you sliced it, diced it, or even julienned it, Truth had to come from the Bible somehow.  Two things the Good Book was against unequivocally were lying and adultery.  Who’d have thought Southern Baptists would be standing in line to change divine law, by their own definition?  And for what purpose?  To support a man who clearly doesn’t share their values, and shows it daily.  These former Communist-haters now cozy up to Russia with a familiarity that suggests Trump isn’t the only one sleeping around.  As a former Evangelical, I have to wonder whatever happened to the concept of the double standard.  This was never considered right or fair or biblical.  Now it’s all three.

Just this past week the Washington Post ran a story about an Evangelical pastor preaching a series of sermons on the Ten Commandments.  Somehow they’ve made their way from courthouse lawns into churches, it seems.  The week he reached adultery, he didn’t know what to say to his Trump-supporting flock.  He himself supports a leader whose told an average of hundreds of lies per day since January of last year.  Among them allegations that he didn’t commit adultery.  Or pay to have it covered up.  Or know that his lawyer had paid to cover it up.  But when said lawyer realizes that the shepherd doesn’t care about sheep—can’t even find one in a paddock—he suddenly remembers that there is Truth with a capital “T.”  But Evangelicals don’t have to listen to anyone named Cohen.  After all, they have wool in their ears.  Just don’t read what the Good Book says about hearing what you want to hear.  What’ve they lost?  Not just their shepherd, but their very souls. 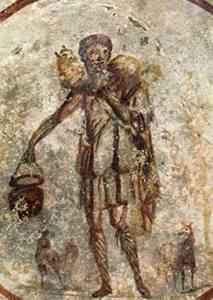