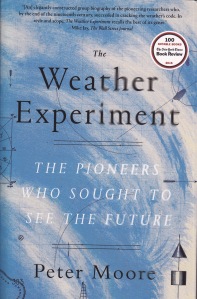 “To understand the weather is somehow to glimpse the divine.“ I honestly don’t remember writing those words. A friend of my drew them out in a quote last year (perhaps the only time my book has every had such an honor) and they resonate with what a much better known writer has said. The Weather Experiment: The Pioneers Who Sought to See the Future was a book I bought upon first sight. Peter Moore’s story, like the science of the atmosphere, is only a small part of the whole. I glanced through the index for Increase Lapham while still in the bookstore, but despite his absence bought the tome anyway. I’m glad I did. Throughout this account of how meteorology developed in the nineteenth century religion and science are continually at play. As Moore points out, when faced with a violent storm, before any means of grasping the sheer enormity of the atmosphere existed, the only reasonable explanation was God. And it wasn’t just the clergy who believed this. Those we now recognize as scientists thought so too.

There are several key players in the drama of how we’ve come to our current understanding of the weather, but one that surprised me most was Robert FitzRoy. Everyone knows that FitzRoy was captain of the Beagle on Charles Darwin’s voyage that revolutionized science for ever. Some are even aware that FitzRoy, especially after his marriage, because a staunch evangelical Christian, parting ways with Darwin so far as to wave a Bible over his head at a public debate on evolution. I, for one, had no idea that FitzRoy almost singlehandedly invented the weather forecast. And that he did so as a government employee and doing so brought the ridicule of the scientific establishment because predicting was considered the purview of unscientific minds. It was as if the world I recognize had been whirled 180 degrees around by some unseen storm.

Any book on the weather, as I’ve learned, has to include a discussion of global warming. Climate change is real, and it is something we’ve done to our own planet. In a day when statistics can be produced showing that many scientific results are funded by companies with vested interests in the outcome of the experiments—even those at top universities—and we can see just how complex this web of financially motivated truth has become. Science is not pure rationality. It never has been, and it never can be as long as humans are the ones undertaking it. And we are beginning—just beginning—to see that there are some places where the wind blows freely through although those in white coats have assured us the room is sealed. This is a fascinating read and any book that makes me think I had the start of something profound to say is one I’ll buy on impulse any day.