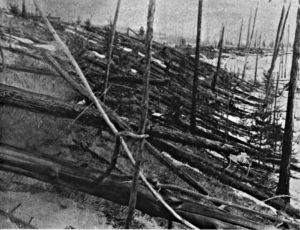 In a recent reading project to keep me edgy and paranoid, I went through Surenda Verma’s The Mystery of the Tunguska Fireball (Icon Books, 2005). Quite apart from giving me a quick X-Files fix, this book is a thorough and reader-friendly account of an event that, no matter what you make of Mulder and Scully, should have been a major wake-up call for those of us who call planet Earth home (some exceptions apply).

On June 30, 1908, a fireball exploded over a remote region of Siberia. Even today it is nearly impossible to reach the spot. The traces of this event, which don’t seem to support any given theory completely, point to an explosion on the order of 10–20 megatons (the bomb dropped on Hiroshima, for contrast, weighed in at about a thousand times lighter on the TNT scale). The sparsely populated region was devastated by shock waves and fire, and only by a slim thread of fate did all of us not end up on the extinction list. A blast of that intensity, had it been located lower in the atmosphere, could have easily brought on a nuclear winter — with no Jingle Bells!

Sometimes when life seems too intense, I find it helpful to think of what a wonder it is to be here at all. Perhaps it is a religion of wonder. Earth’s history is replete with mass extinctions that ultimately allowed for our own evolution, but which wiped out over 99 percent of all species that have ever lived. The Permian Extinction, which allowed for the rise of the dinosaurs, nearly obliterated life itself from our rocky home. When I look to the future I see disjunction and continuity. Jupiter was dealt a second cometic blow within two decades last week, and the odds are ticking on our own tiny planet. I wonder what ancient mythology would have made of Tunguska — who was the lady or lord of the fireball?