In the Bible there are no cats. This silence is odd since cats have been associated with humans for over 9,000 years. Large felines, of course, appear in the Bible; lions and leopards prowl sacred writ, but nary a housecat. In a world of subsistence farmers, the concept of a “pet” is also absent — an animal as part of the household is yet another mouth to feed. The closest we get to biblical pets is in Nathan’s parable to David about Bathsheba. Here the “pet” is a lamb — a potential source of wool and almost certainly a funeral involving roasting and possibly mint sauce.

The Israelite view on animals is difficult to assess fully. Clean and unclean classifications seem to relate to predatory behavior and “fitness” for an environment. As a notorious but useful predator, cats could have been somewhat of a religious embarrassment. Having tamed feral cats, I know that the key is to make repeated offerings to a cat (by the way, this is the advice of Old Deuteronomy in Cats). Being quite self-sufficient, cats can find what they need without human, or divine intervention, thank you. Perhaps feline behavior resembles that of the gods a little too much for people inclined towards henotheism? 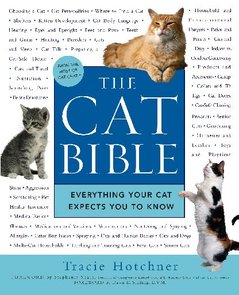 In the beginning was the cat

The problem with predators is no one knows what they’ve been eating. Predation involves bloodshed and blood pollutes. Look at what the cat dragged in! Biblical cats are victims of argumentum ex silentio — we can never know why they don’t merit a mention. As carnivores they are necessarily unclean. By the Middle Ages, for reasons still unclear, the church and superstition rendered cats as the familiars of witches. Ironically the associated killing of cats likely helped to spread the Black Death because of the removal of the flea-bearing rodents natural predators. In most ancient cultures cats are credited with supernatural powers. Since the Bible strictly guards this privilege, perhaps cats stepped just a little too close to divine prerogatives to merit a mention in the Good Book.