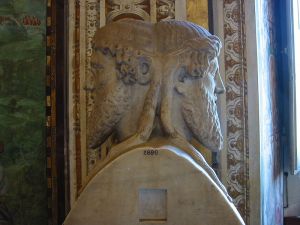 As the world stumbles into another new year, my thoughts turn to Janus. The namesake deity of January (since the Romans gave us a winter New Year’s day), Janus is a poorly understood ancient deity. Since he is overseer of beginnings and endings of all sorts, he is often portrayed with two faces or heads — one facing forward and the other facing back. There are no attendant mythological stories to this god, although he appears to have been very important in early Roman religion. He comes to mind as I prepare to teach a course on mythology that I haven’t prepped for since Oshkosh; my brief holiday break has been spent reading classical mythology.

Not only to we face a new year, but the beginning (or ending, it matters not which to Janus) of a new decade. Looking back over the muck-up made of the first decade of the twenty-first century, often because of religious extremists, I wonder what Janus sees down the road. There are many who feel optimistic about our firm bridle on technology and its ability to make our lives easier. Some of us believe that society has lost its appreciation for the classical study of the humanities and that we have lost our way because simplistic religion has seized the reigns from sensible mythology. In an age of information clutter, there is no one able to synthesize reason out of any of it. Perhaps it is the human condition.

Janus likely originated in the Ancient Near East. Once he reached Rome he continued to evolve into a major deity until eclipsed by the Olympians (many of whom first appear in the Ancient Near East as well). Not ironically, religious tolerance and religious intolerance both seem to have derived from the Near East also: Cyrus the Great’s declaration of religious freedom emerged in the midst of theocidal demands on the part of jealous gods. Now as we stand on the brink of a new decade, Janus only knows which way the unfeeling pendulum will swing.