A time-honored adage educates each generation not to discuss religion or politics in polite company. The reasons for this are transparent; both religion and politics tend to be fiercely held belief systems and clashes between differing parties seldom end without scars and regrets. I recently read Max Blumenthal’s Republican Gomorrah: Inside the Movement that Shattered the Party. Initially my impression is that this book ought to be required reading for members of any political party so that they might find documented evidence of whence the real power struggles lie. It is known by anyone with a modicum of political savvy that the past several presidential elections have been decided on the success of courting voters of the evangelical variety of Christianity. What Blumenthal reveals and other sources confirm is just how intermixed religion and politics have become. 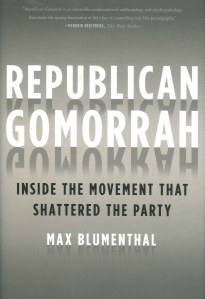 One of the most important books of last year

This is a very thorny issue. America was founded as a nation advocating religious freedom and also as a nation that would open its leadership to any qualified (more-or-less) candidate. Clergy have historically served in politics, but presidential candidates who are actively ordained and practicing their office have been rare. Not so rare in recent years, however, are those who forsake the adage and boldly proclaim their faith as a key to garnering votes. This has led to a public interest and scrutiny of what used to be the extremely private life of an individual. Religious beliefs, quietly held, motivate many people – presidents and politicians included. The difficulty Blumenthal highlights erupts when the genuinely religion-driven charge for political office with the hopes of implementing policy based on their personal faith. Americans have taken a new interest in discovering what the Church of Jesus Christ of Latter Day Saints is all about with the recent candidacy of Mitt Romney. We covered that religious landscape in Religion 101. Reading Blumenthal, however, I learned something new about Sarah Palin’s religious convictions.

Deemed “the Third Wave” movement (see also Bruce Wilson’s article in the Huffington Post), Palin’s religion is a variety of Christianity I’d never heard of even with a lifetime in the field of religious studies. What seems clear from the sketchy information available is that the putative wave began in the 1980s (when I was too busy studying religion to notice) with the work of Rev. C. Peter Wagner. Its goal, according to its theologians, is the takeover of first the church and then the world. Not just metaphorically. Since Palin told reporters, according to today’s paper, that she is seriously considering a run for the presidency in 2012, I wonder if it is time for all of us to go back to school and learn a little more about this variety of religious belief. I’m old enough to remember a time when politics was politics and religion was religion, and ne’er the twain did meet. That day is gone, and Americans will find it necessary to learn about religions again to discover the sometimes hidden motives behind politicians’ decisions. Max Blumenthal’s book is an excellent primer, but frankly, I long for the days I still recall when politics and religion had separate, securely locked bedrooms.