While I continued officially unemployed I keep to a strict regimen of not watching television except on the weekends. Since we don’t have cable or even a digital conversion box, my viewing is limited to grainy VHS tapes or DVDs. Many of them I’ve watched over and over. Last night I picked out one of perennial favorites, The Wicker Man (1973, of course!) for late-night viewing. Although classified as a horror film, the only terror comes at the very end in a scene that I always find difficult to watch. What keeps me coming back to this film is its unrelenting criticism of religious hypocrisy. (That and the longing evoked by the footage of a Scotland I left many years ago.)

Briefly told, a Highland police sergeant, Neil Howie, is lured to a fictional Summerisle in a mouse-and-cat game where he ends up the victim of a neo-pagan cult. The stunned Christian constable cannot believe the superstition evident on the island could still exist in modern Britannia, leading to one of the highlights of the film. Questioning Lord Summerisle, played by a striking Christopher Lee, Howie accuses him of paganism. “A heathen, conceivably,” Summerisle concedes in a tight shot, “but not, I hope, an unenlightened one.” Howie is shown growing increasingly rude and unsympathetic, forging a makeshift cross to lay over a Druidic burial. He threatens Lord Summerisle with being investigated by the authorities of the Christian nation under whose aegis he falls. The tensions between religions grow until the final scene.

The constant interplay between control and conviction raises again and again what the true nature of religion is. Summerisle reveals that the neo-paganism began as an expedient way to encourage the locals in growing new strains of crops. The images of palm trees in the Hebrides may seem unwarranted, but having strolled among them on the Isle of Arran nature itself belies the orthodoxies of convention. Does religion rule by force of law, depth of conviction, or pure expediency? The makers of the film were wise enough to leave that to the viewer to decide. No wonder that on many a bleary-eyed weekend night, ousted from my once stable career by the overtly religious, I choose to watch, yet again, The Wicker Man. 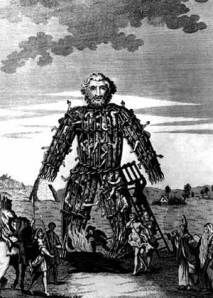 2 thoughts on “Wicker or Wicked?”