Catholics, secularists, and even a Pharaoh or two. Loud, pounding music. Dancing teenagers. It must be FIRST Robotics season again. Although I’m ambivalent about the implications of a world filled with robots, I can’t help but be impressed by what high school students can do when they are mentored so closely by adults eager to share the tricks of the trade. If you’re not familiar with FIRST Robotics, here are the basics: each January a new game objective is released. Participating high schools throughout the world have six weeks to plan, design, construct, and program a robot to perform the tasks spelled out. Since this is a busy time of year for many schools, dedicating extra hours to building a robot leads to complaints and loss of sleep—maybe a skipped supper or two. When they come together on the playing field, however, all that is forgotten and the wonder is that kids, who are often disparaged in our society, have managed to construct a working, complex machine capable of tasks impossible for many adults (for example, doing chin-ups).

Every year I can’t help but think how like a religious service these events are. The robots are like deities to be served and the technology flits about like mechanized angels. There is an increasingly complex hierarchy of officials telling you what you can’t do (now this is beginning to feel like work!). At the end of the day, however, the kids get to be the stars in a competition that puts brains over brawn. And the robots are treated with extreme deference, because we know that we wouldn’t stand a chance if they had a will anything like the deities of yore.

The religious imagery, however, is never absent. Technology represents humans doing things without divine intervention. These are empirically devised devices, performing according to the laws of physics. And yet, teams from Catholic high schools, bearing mythologically-laden names, join in the world where no gods need apply. Robots, as initially named by Karel Čapek, were human servants, the ultimate in godliness—making images in our likeness to do our bidding. And yet we can’t escape the language of religion when thinking about our own creations. The fascination applies to non-parochial schools as well, with some teams claiming names echoing themes from holy writ. Creating autonomous beings is next to godliness. We make our own future, and, god-like, we hope that nothing goes wrong. 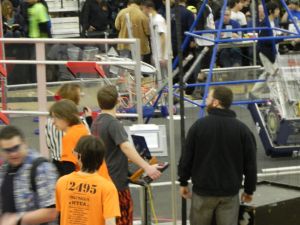