Some things you just don’t mess with. Just in case. For a variety of reasons, not least of which is lack of biblical support, many Christians no longer believe in Satan, or “the Devil.” As I written before, the Hebrew Bible has no such diabolical character and he seems to have been devised from an old Zoroastrian dualistic belief system when he finally does appear. In other words, Satan is not among the core beliefs of the Judeo-Christian tradition. Nevertheless, according to an Associated Press story the Satanic Temple is petitioning to have a statue of Satan placed on the capitol grounds in Oklahoma City. The action was prompted by the placing of a Ten Commandments monument in this public space, and, invoking the freedom of religion clause, the Satanic Temple has decided to play tit for tat. Either religion is free, or it’s not. 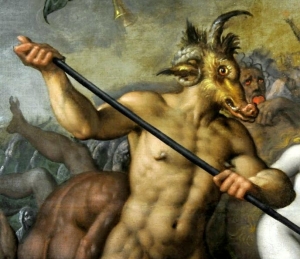 Although the Satanic Temple claims to be sincere in its beliefs, the group’s website indicates that it understands religious belief in a metaphorical way, and that it wishes to parse superstition from religion. This envisions revising Satan as an “icon for the selfless revolt against tyranny,” according to the AP story. The commissioned monument includes a Baphomet-style Satan (goat head and beard, wings and pentagram—you get the picture), that features—sure to raise the ire of Oklahomo sapiens—children gathered around the dark lord. It will double as a seat where individuals may sit on Satan’s lap, although I’m not sure what they might be asking for. Various representatives of the Sooner State say they’re all for religious freedom, but Satan just has no place in the conservative breadbasket of the nation.

Provocation occurs on both sides in this trial of wills. Justice can be realized without Moses’ top ten on every courthouse lawn. The Code of Hammurabi demonstrates that. People are capable of enacting justice without God, or the Devil, telling them to do it. The triumphalism of religion is the heart of the issue. In a world daily aware of those outside the neighborhood, finding that other religions exist and thrive is an affront to the “one true faith,” whatever it may be. It may be that Jews, Christians, and Muslims have no problems with the ten commandments. Other religions might. Leading with having “no other gods before me” starts the conversation off on an awkward tone. The solution may be as simple as amending the commandments to add just one more. If we can see our way to doing that I have one that I’d like to propose: “thou shalt not let thy religion cause childish behavior.”

2 thoughts on “The Devil Made”