Sharknados aside, we seem to be in a lull of apocalypses at the moment. In the run-up to the change of the millennium and 2012, we perhaps had our fill of dire predictions of the end of all things. Funny how the fears seem to run so high when the Grand Old Party is telling us what to believe. When we settle down and try to wrestle with real-world issues with real-world ideals, the need for watching it all burn seems to settle down in the back seat and let the adults drive for a while. 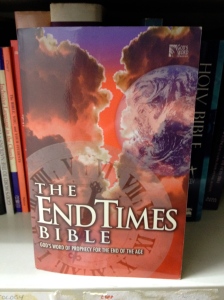 I recently came across The End Times Bible (now out of print). Published in 1999, this Bible had a not-so-subtle message that the end of all things was nigh. As it had been before, and, knowing human nature, will be many more times again. I imagine myself, in a Left Behind fantasy, watching a neophyte trying to make it in the post-apocalyptic world with a Bible. References to the end times are rare in Holy Writ, and dreadfully obscure. Reading Tim LaHaye or Hal Lindsey you might think the Bible has step-by-step directions for negotiating the wrath that is to come. As if the Bible were a recipe book and you wanted chocolate-chip cookies. Ironically the world is full—over-full in point of fact—of people with advanced degrees in Bible who’ve spent years and years of their lives learning to uncover the minutest hints that the Bible gives. Most of these folks are unemployed and wouldn’t mind sharing a bit of that simplistic apocalyptic pie baked up by the premillennialists. And yet, the world goes on.

Even as I was researching The End Times Bible, however, I began seeing references to the next apocalypse. Some are hopefully suggesting 2019, since, apparently, God likes round numbers. The reprieve we’ve been feeling, I have no doubts, is only temporary. In the course of human events we will have alarmists elected to high offices and once again panic will begin to build. The Maya let us down, and Howard Camping up and died. No worries—there are other arcane civilizations and the world knows no shortage of prophets in button-down shirts. Still, I’ve kind of enjoyed this little vacation without having to hush the irrational fears that God’s non-biological clock is inexorably ticking.

The biblical world is a simple one, in its own way. Created in six days just a few thousand years ago, it topples off its pillars and ends in a fiery demise in some millennial scenario, if only it can keep its own story straight. And like any good story, children will come back to it time and again.