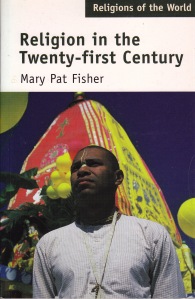 New Religious Movements (NRMs) have long fascinated me. As a natural historian, looking back over where we’ve been has been my usual source of orientation. The idea that a new religious truth could emerge used to strike me as unlikely, especially in the western hemisphere. All major religions of ancient times have come from Asia. (I’m using “major” here only in terms of numbers, not importance.) I wasn’t sure if Mary Pat Fisher’s Religion in the Twenty-first Century was going to be about those traditional religions or NRMs. Both, it turns out. This little book, spun off of a bigger book, looks at very brief histories and contemporary expressions of traditional religions as well as some newer expressions of the spiritual quest. As such, it really doesn’t strive to reveal too much that’s new, but I found it interesting nevertheless.

To begin with Fisher reveals a bit of her own spiritual journey. This may be the first time I’ve ever read of a major textbook author (her larger world religions books are bestsellers) admit to having had a near death experience (NDE, as long as we’re using abbreviations). I know for a fact that Fisher is not the only academic to have experienced such, but trying to get anyone to admit as much requires, well, the confidence of a bestselling textbook, I guess. The fact is, human beings have a spiritual sense. Even academics. It can be effaced, sublimated, buried, or neglected, but it is there. There’s no other way to explain the persistence of religion. Even Nones, to update the discussion a little, often list themselves as spiritual, but not religious. It is part of the human condition, and it is well worth trying to understand.

This little spin-off text, at seventeen years old, does look a bit dated. Some of the predictions for the then coming new millennium were a touch optimistic. I suppose that’s the danger of any description of contemporary developments. Interfaith dialogues and initiatives, I suspect, still continue although we hear little of them. We continue to use religions as a way to divide between insiders and outsiders. Although our common yearning for spirituality has great potential to bring people together, historically it has wrenched them apart. I’m not sure that this particular book by Fisher is still available any more. Or it may have been updated. As one who tends to look back over history, however, I find the optimism refreshing. Perhaps as we continue to struggle with what it means to be human we will come to realize that religion is about what is inside, not out.

4 thoughts on “Sects These Days”