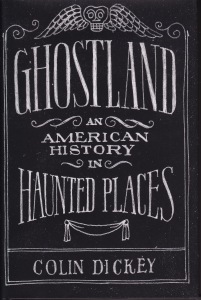 Ghosts appear whether they exist or not. People have seen them, we know, since as early as written records permit us to know. I first ran into Colin Dickey’s name in a review of the new Ghostbusters movie. The bio made mention of his book, Ghostland: An American History in Haunted Places. Then it was a matter of waiting until autumn to read it. It’s a book that will long stay with me. Dickey’s not out to prove or disprove ghosts—they are simply there (and sometimes not). Ghosts, however, teach us quite a lot about the living. What we value. What we fear. What we disdain. Some of the ghost stories in this book are famous and familiar, others obscure and pedestrian. What they all have in common is a sense of place.

This book is primarily about place. Ghosts seem to be generated by the fact that people have lived here before us. Focusing on the United States, Dickey points out that land stolen from others has inhabitants already. On top of Native American sites, we now have a few hundred years of European and African and Asian building. Lives lived on top of other lives. And although we can’t say for sure what ghosts are, they do seem to be associated with buildings, or at least places. Organized in a kind of concentric structure, the book describes ghosts of haunted houses, then haunted businesses and public buildings, including haunted outdoor spaces. And finally haunted cities. These hauntings are residue of our own making. We build, we inhabit, we die. Whether ghosts are just memories or uncanny feelings, they are ghosts nevertheless.

Combining a couple of my favorite ideas—ghosts and the sense of space—Ghostland is a rare blend of history and folklore. The architecture of our constructions functions like tombs for our imagination. We are spiritual beings, whether religious or not. Even if we’re in denial of that spirituality, we sense that somehow life doesn’t simply end. We’ve left a mark, a scratch, a dent. As long as those who’ve known us live, we continue on in their minds and lives. And some, it seems, remain beyond even that to be seen by strangers centuries later, maintaining the sacredness of space once familiar while living. Ghost stories are human stories, and Dickey is a sure guide along the way. He doesn’t tell you what to believe, but he tells you something you already may know but not realize. No matter whether they’re ever proven, or whether they even really exist, as long as there are human beings there will also be ghosts.