So, it’s moving day.  Amid all the packing and sorting—outside the regular 9 to 5—I realized that this was the first move I’ve made outside the constraints of academia.  Well, maybe not strictly so, but I left Nashotah House in the summer, and I was unemployed when I moved to New Jersey to start in the publishing world, so there was no office work involved.  The move without changing a job is a tricky thing.  And exhausting.

I didn’t write about the process early on, in case it didn’t happen.  Buying a house is an exercise fraught with peril and it can collapse at several junctures over the three-or-so months it takes to finalize things.  Then there’s the move itself.  Back in January I found myself setting books aside that I thought I might not need again in the next few months.  We started hauling boxes down from the attic to pack those books in February and March.  We finally made an offer on a house in May, and now, seven months after the process began, we’re ready to move.  Or so I tell myself.

Our last move didn’t go exactly as planned.  Like Bartleby and Loki, we were moving from Wisconsin to New Jersey, perhaps seeking our destiny.  Who knows—maybe undoing the universe?  We hired Two Men and a Truck to move us.  My brother in New Jersey said he’d meet the truck since it was going to take us a little longer to get there.  On arrival day, no truck.  We called the company to find that the said Two Men had actually abandoned said Truck in a parking lot in Chicago.  Although embarrassed, the big Two Men upstairs made no offer of a discount on the move, even if it cost my brother an extra day of work.  We’re hoping for better things this time around.

International Van Lines didn’t call the night before, like they said they would.  After a somewhat restless night (should I stay or should I go?) my usual 3 a.m. internal alarm kicked in.  An email, like a thief in the middle of the night, told us when to expect the big guys and their vehicle.  Moving is kind of like prophecy in that regard.  In any case, for those accustomed to early posts, there will be a delay tomorrow since the internet people are finishing the virtual move around 11 a.m.  Church time on Sunday.  If we pull this move off, I might have to admit there are miracles after all. 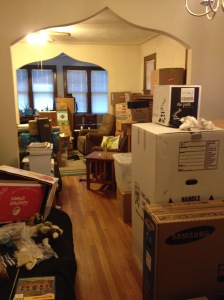 One thought on “Moving Day”