To say it was an easy move would be a lie.  I write this on a beautiful, cool, clear July morning.  Only I can’t even calculate the last time I slept.  Not new house syndrome, but that move!  Our personal account manager at International Van Lines was supposed to call us between 4 and 6 p.m. on Friday to confirm the time of the move.  She would also tell us how much money was needed, in cash, by the movers.  In cash?  She’d taken my deposit by credit card; why couldn’t the balance be paid that way?  She was supposed to call to clarify.  I suspect my tone makes it sufficiently clear that she didn’t.  I went to bed not knowing if we would be moved or not—I only reread her email after packing the last box (or so I thought) at 7 p.m.  The IVL offices were closed.

I awoke at 3:30 to an email saying they would be there between 9 and 11 a.m.  And they would be wanting an uncomfortably large amount of cash.  My wife went to get it, and three guys and a truck arrived at 9:15.  I could see their faces blanche at the walkthrough.  They’d been told it would be a ten-hour job.  It turned out to be seventeen.  Nothing makes you feel a cad quite like being thought a snake-oil salesman.  Our bill of lading was just a bit short of reality.  Packing the truck wasn’t finished until 9 p.m.  Unpacking until 2:30 a.m.  Our three guys were joined by two more for the unpacking.  Most everything went into the garage because, well, no stairs. 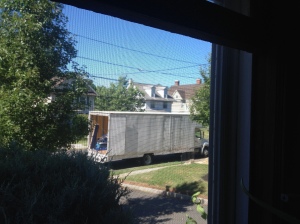 Twice during the day the amount of cash needed was upped by a significant amount.  This was one of those “we’re in it now” situations.  We paid what was requested.  The internet guy was arriving potentially by 8 a.m. this morning.  Who can sleep knowing the alarm is set for four hours from now?  And our labeling scheme was so arcane that, well, most everything ended up in the garage.  The movers themselves?  Absolutely fantastic!  I’m sure they’ll be talking about this move for months to come.

Looking outside, the yard wants mowing.  The internet guy is coming.  Who needs sleep when my life of telecommuting begins tomorrow?  The good news is it took only half an hour and one trip to the garage to find the coffee filters.  I’m looking out at a beautiful, crisp morning.  Over an Everest of boxes.  But you won’t know any of this until the internet guy gets here.  Somehow I sense we just accomplished something quite extraordinary.

2 thoughts on “The Moved Unmover”