Holidays are all about family.  In our society where families, due to jobs, often get spread across states, if not the world, we value holidays as times to get as many as possible of our close ones together.  They’re also rare days when work isn’t required, and true relaxation—a rarity—can take place.  This Thanksgiving break I’ve been reading the proofs for Holy Horror, but I put them aside after anyone else awakes.  We all, I think, come out of it feeling rested.  It has been many years, however, since I’ve had time to work on genealogy.  I don’t write much about it here because most people don’t find other people’s family history to be of interest.  Many of us are nevertheless fascinated by the ancestors without whom we would not be here.

One summer while I was teaching at Nashotah House I became fixated on one great-grandmother.  Nobody in my family knew her name.  I had a first name (a fairly common one), and, adding insult to injury, I grew up with her daughter (my grandmother) living in my home.  Kids, as nature dictates, aren’t interested in that kind of thing, and nobody thought to ask my grandmother her mother’s name before she died.  I found myself stuck at just two generations back.  I made trips to the repository of state and federal records at Madison, spending the summer in a basement room reading through microfiche—talk about ancient history!—trying to find her name.  Nothing.  I wrote to the federal agencies of vital statistics in Washington which gladly cashed my checks but never sent any information.  Later, when the internet began to fill up, I searched for her married name.  Nothing turned up.  I ordered books of gravestone inscriptions from the District of Columbia, where she’d died, but dug up nothing.  One of the cemeteries sends me newsletters now.  When my daughter asked why I was getting them in the mail I told the story.  We began to search online.

I couldn’t believe it.  At least a decade and a half after I’d found no clues, and after many web searches after that, we finally found her.  Someone had entered her on Findagrave.com.  As I pondered the dates, which seemed about right, my daughter pointed out that the site stated she’d been married to my great-grandfather.  My ancestry suddenly grew by two new surnames because her parents were also listed.  I was stunned.  I once calculated that, due to exponential growth, just ten generations back, (eight “greats”) we all have over a thousand ancestors, or 500 couples.  Genealogy could be a full-time addiction.  For the moment, however, I’m pleased to have found a long lost name, and an instantly larger family for this holiday season. 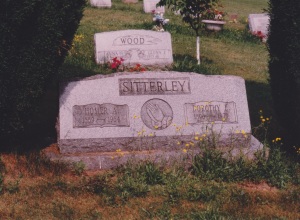