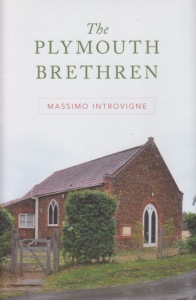 Outsized ideas from under-recognized sources always captivate me.  I have to admit that my own childhood fascination concerning, and fear of, “the rapture” still haunts me.  While our house isn’t large, the other day I couldn’t see or hear my wife anywhere when I knew she was home and my first thought was that she’d been raptured and I’d been left behind.  Please don’t try to console me with logic; I know very well the problems with this initial assessment and knowing the history of the idea of the rapture can’t stop the primal fear when it strikes.  So it is with religious ideas inculcated in the young.  That’s why I knew I had to read Massimo Introvigne’s The Plymouth Brethren as soon as I heard of it.  The Plymouth Brethren, and specifically one of their formative leaders, John Nelson Darby, were the inventors of the rapture.

Introvigne’s book doesn’t trace rapture history (other books do that), but he does narrate, in an admirably succinct treatment, whence the Brethren arose.  In the nineteenth century in the British Isles, some were very concerned that Christianity had gone off the rails.  Accommodating with secular society, it had become heavily doctrinal and, worse, political.  Breakaway groups were common, including those who went back to the “Bible alone” as the basis for assessing what being Christian truly was.  The Plymouth Brethren developed in this atmosphere and they still remain a relatively small Christian sect (I use that term completely neutrally).  Even though they themselves splintered over time, they were never a very large group.  They, however, invented the rapture.

John Nelson Darby, one of the founders of the movement, believed history was divided into dispensations, or periods, predetermined by God.  The dispensation in which we now live (and in which they lived two centuries ago) would include a dramatic rapture that would allow Darby’s understanding of eschatology to fall within the system he developed.  This idea was picked up by Cyrus Scofield and included in his enormously influential Scofield Reference Bible.  That Bible, although many evangelicals considered the Plymouth Brethren as a kind of “cult,” was used as the unquestioned roadmap for the end times.  It was picked up by such promoters as Hal Lindsey and Timothy LaHaye and made into a meme that just about any educated person recognizes.  We all know what “the rapture” is, although the Bible itself doesn’t spell it out at all.  Introvigne’s book is very informative on the Brethren but his chapter on their ten main divisions is, necessarily, a touch confusing.  Well balanced and fair, this is a great source for those who wonder who these people were that gave us such worries when our wives have “disappeared” into some other part of the house.