Fundamentalists live in a supernatural world, otherwise their view of the Bible simply can’t hold up.  I’ve read or studied about the Bible for well over forty years now and I’m still learning things.  Interesting and strange things.  Some time back I wrote about the bizarre world of the many books of Ezra/Esdras in various versions of the Bible, some canonical, some not.  While chasing up a reference the other day I had to delve into the similarly complex sphere of Jeremiah.  Jeremiah is the only prophet who names his secretary, a man called Baruch.  This fact led to a series of books pseudepigraphically written by Baruch, but before we get there the book of the prophet himself is also confusing.  Since Jeremiah is the prophet whose life is said to most resemble Jesus, for Fundies this is important information. 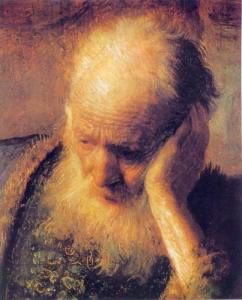 The book of Jeremiah isn’t in chronological order.  This always throws introductory-level students, for it shows clear evidence of editing.  Now, at least Jeremiah does tell us about Baruch, so we can blame his poor organizational skills and still maintain a divine aura for the book.  The earliest translation of Jeremiah, the Greek Septuagint, lacks some material.  Indeed, the Greek is about an eighth shorter than the Hebrew, raising the question of whether an original (reflected in the Greek) was expanded or whether some of the confused original in Hebrew was cut.  Protestant Bibles assume, by their placement, that Lamentations was written by Jeremiah but it clearly wasn’t.  It doesn’t match his theology at all and the “of Jeremiah” in the title was made up some time after the book was written, and this is only a start.

The Apocrypha, or Deuterocanon of the Catholic, Orthodox, and Anglican churches, contains a book called the Letter of Jeremiah (not written by Jeremiah), and a book called Baruch.  I went looking for a reference to Baruch only to find it was in the Apocalypse of Baruch.  When I had trouble finding it, I had to consider that two books bear this title, 2 Baruch and 3 Baruch.  The former is in Syriac and the latter in Greek and they aren’t the same.  Because of these two (also pseudepigraphic) books, plain old Baruch is also known as 1 Baruch.  And there’s also a 4 Baruch.  None of the Baruchs were written by Baruch and Lamentations and the Letter of Jeremiah weren’t written by Jeremiah.  Neither was his own book because he tells us Baruch wrote it down.  I never did find my reference, and I realized that only in a supernatural world would any of this make sense.