Moving is a process that really has no end.  I suppose if working folks took a few weeks of staycation and really concentrated, getting everything unpacked might be a possibility.  Although our move was nearly two years ago it didn’t happen that way, and the self-isolation of the pandemic has led to only more time drains, not fewer.  We still have boxes waiting to be unpacked, and, of course, like many people we store memories in boxes.  Life is an accumulation of things that aren’t valuable but somehow aren’t disposable either.  While putting some things away in my study after work recently I spied something that has been in storage probably since I graduated from college.  I stopped and stared at it because even glimpsing it took me back instantly to my childhood.  What was it?  A devotional card. 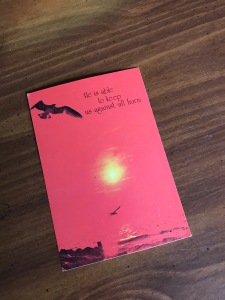 The memory it prompted was sad, in a way.  We didn’t have much money when I was growing up (some things never change), so what we could afford was inexpensive stuff.  My faith, rather than being the optimistic, happy kind of fundamentalism, was rather the fearful, wrath of God kind.  I was a scared little boy.  Phobias ran deep and wide.  I bought cards like this to assure me that things weren’t so bad.  This particular card has three reassuring verses from the Bible, all taken out of context, on the back.  Seeing the card reminded me of the several others I once had.  Our homelife wasn’t peaceful, and I often had to retreat to where I could look at my devotional cards for reassurance.  At college I started to grow optimistic only to have my career prove that I was right at the beginning—life is scary and insecure.

I picked up the card.  I put it on my desk.  My mother had returned it to me, I recalled, when she moved into the trailer park.  A box of my stuff had been left at home (unfortunately not the box with all the 1970s baseball cards I had as a kid).  And two or three of the devotional cards had been tucked into it.  When she gave me the box I didn’t have time to sort through it.  The vacation time was all used up by driving all the way there and back, and so it got loaded on the truck with everything else, the flotsam and jetsam of a childhood spent being afraid.  This card was only one of several, and if I’m honest I’ll admit that it has reopened a box that may have been left by Pandora.