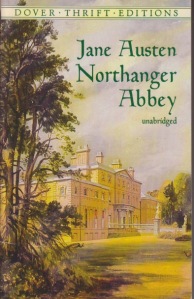 In my efforts to satisfy the Gothic longing of October—such a melancholy month—I’ve been reading Jane Austen’s classic, Northanger Abbey.  I avoided this particular title for many years because I knew that the Gothic frights were all rationally explained.  Austen was such an accomplished writer that she was able to poke fun at the Gothic genre while participating in it, at least somewhat.  I actually read this novel with no idea concerning the plot or characters.  Sometimes for works of the western canon these elements are so well known that you kind of know what to expect.  Northanger Abbey, although appreciated, isn’t often considered Austen’s finest work.  In fact, it was her first novel finished, but was only published posthumously.  As I writer I can understand that.

The story follows Catherine Morland in a satire of Gothic novels.  In fact, Catherine’s favorite book is Ann Radcliffe’s Mysteries of Udolpho, one of the Gothic standard-bearers.  The first half of the novel (pre-Gothic) sets the story up with two love triangles formed in the city of Bath.  Austen excels at making the reader uncomfortable with characters.  So much so that the second (Gothic) part of the novel ends up making one of the formerly noble Tilneys,  father of Catherine’s love interest Henry, look downright snobbish and petty.  O, the egos of the privileged!  The fact that she threw this in just about ten pages before the close (in my edition) made the ending all the more anxious.

There are no ghosts in Northanger Abbey.  No murders or poisonings took place there.  No secret manuscripts contained cryptic truths.  No secret passages led to hidden chambers.  Austen sets readers up for all of these, only to bring the conceit down in a showcase of her satirical ability.  The novel still frequently ends up on lists of Gothic classics.  I wonder if readers don’t get the satire.  I had put off reading it for many years because I knew it to be good-natured fun-poking at a genre I unaccountably enjoy.  At least I know I’m not alone in this.  I’m glad, in any case, to have finally read it.  Jane Austen was a most capable writer, a master of portraying human foibles particularly well.  The problems of the landed gentry, however, as I’ve noted before, aren’t really of interest unless there’s actually a ghost or monster lurking in the shadows somewhere.  Without monsters even an imposing abbey owned by a spoiled petty nobility is just an abbey devoid of purpose.