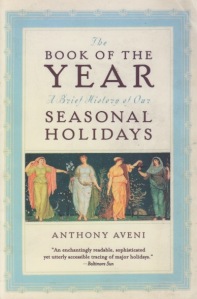 I have to confess that I’ve had trouble letting go of the holidays this year.  Actually, that’s kind of normal.  The let down from “sacred time” (however that may be understood) to “ordinary time” is often a rough transition.  Anthony Aveni discusses this, among other things, in his short study, The Book of the Year: A Brief History of Our Seasonal Holidays.  Not a deep history, but a thoughtful consideration of the seasons of our celebrations, the book informs and entertains.  There are surprisingly few books that cover the holidays, despite their centrality to modern life.  What person in business doesn’t look forward to the third quarter?  Who doesn’t anticipate a little time off work, punctuated throughout the year?  Aveni is one of the few general purpose books that you can go to for background on several seasonal holidays.

Aveni is somewhat of a polymath, being both an astronomer and an anthropologist.  He clearly has a special interest in first nations studies as well, as The Book of the Year occasionally dips into the rituals of Latin America.  A number of holiday traditions are explored here, leaving the reader wanting more.  I find the question of why we celebrate the way that we do a fascinating one.  Many of our customs have unexpected roots and many of them were transformed along the way by the church.  An unusually high number boast recent developments that we tend to think of as foundational to their essence.  The holidays as we grew up with them likely stay in our minds as the default way they should be.  Interestingly, bringing them into continuity with ancient customs reveals a steady evolution, mostly from sacred to commercial.

Since I wrote a book (unpublished) about the holidays several years ago (and have read a number of the same), I’ve always dug into books like this whenever I can find them.  Holidays are the heartbeat of the year.  Many of us look for something to help pace us in the reckless spinning vortex that we call capitalism.  Our lives are all interconnected, and the holidays also have subtle intricacies as well.  As they wind down, they tend to point both back to the previous red-letter day and forward to the next one.  Aveni doesn’t cover political holidays very much.  He does mention Martin Luther King Day, the next federally recognized day of rest.  As Aveni points out, the end of the Christmas season can stretch as far as Candlemas, so I guess we still have a few weeks to go before it’s all officially over, in sacred time.

One thought on “Year Book”