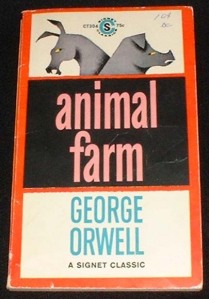 Where was Moses when the lights went out?

After undergoing a bout of oral surgery earlier this week, even before the nitrous oxide wore completely off, I pulled George Orwell’s Animal Farm off the shelf for a re-read. I hadn’t read it since at least 1984. It was even more disturbing reading it this time just off the Bush-Cheney years, and I realized that the Napoleons and Squealers are still with us. As a prophet Orwell may not have always got the dates right, but he was clever at spotting trends.

In this reading of Animal Farm a minor character leaped out at me. Among the tame, but non-domesticated animals was the raven Moses. Moses is the special favorite of farmer Jones and tells the animals of Sugarcandy Mountain vaguely up in the sky, where conformist animals go when they die. When the rebellion takes place, Moses flies off and remains absent until near the end of the story when the situation has deteriorated. Once again he is back to tell the others about Sugarcandy Mountain. The connection between Moses and Mount Sinai is transparent, although the heavenly connection is slightly misplaced.

The Hebrew Bible (certainly in the period of Moses) does not recognize what will become the Christian concept of Heaven. Like many ancient West Asians, they supposed that Yahweh lived “up there” at times (at other times he lived in the temple, or on the world at large, or atop some mountain). The “heaven” they knew of had no place for dead humans; the afterlife was a concept that developed very slowly. Moses’ motivation for the ancient Israelites, however, also resonates in Animal Farm, even as it does in the startlingly similar film Chicken Run — freedom. Freedom is the pipe-dream of many religions, but even as early as Moses those dreams run into regulations. Religions have laws long before they have heavens. Perhaps Orwell was onto something after all.