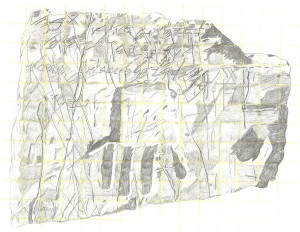 Is there an epigrapher in the house?

As long as I’ve broached the issue of Yahweh and his Asherah, it would be fitting to consider the supporting evidence of Khirbet el-Qom. The attention of William Dever was drawn to this burial site as long ago as 1969 by a badly striated inscription purchased from an antiquities dealer that had been traced to the location. Indeed, the exact spot of the excised inscription was discovered where it had been removed from a pillar near a tomb. Dever originally translated the inscription with no reference to Asherah and with an admission of its poor state of preservation. It was only after Kuntillet Ajrud was discovered (see yesterday’s post) that scholars began reading Asherah back into this extremely difficult epigraphic puzzle.

Since that time, Kuntillet Ajrud and Khirbet el-Qom have become the requisite two witnesses to seal the case: Yahweh had a wife named Asherah. Now slow down a bit! What does the second witness say? The Khirbet el-Qom inscription is extremely problematic; those who’ve examined it closely do not all agree that “asherah” occurs in it at all. If asherah appears here it is grammatically unwieldy: “blessed be Uriyahu by Yahweh for from his enemies by his asherah he has saved him,” and that’s only if the word really is “asherah.” Although Dever has gone on to write a book about God’s wife, he has never changed his original translation sans asherah. I followed his publications on the topic to see his revised translation, but surprisingly, he defers to others, some of whom have never seen the original. Am I the only one who sees something odd here? Only after “Asherah” appears in a grammatically awkward way from Kuntillet Ajrud does she get back-read into Khirbet el-Qom, in an even more awkward syntactic construction, and voila! Yahweh is happily wed!

My scholarship suffers from no conservative agenda, and I cannot be accurately classified as conservative by any stretch of the imagination, but I simply cannot
abide sloppy scholarship (and I’m the one without a full-time job!). It seems to me that if Yahweh was married, even if so considered by a tittering band of heterodox Israelites who liked to hang out in tombs and scrawl graffiti on public property, we would find some solid indication. So far all we have is ambiguous references to Yahweh of Samaria (and Tema) and “his asherah” at Kuntillet Ajrud and a badly defaced inscription from Khirbet el-Qom that may or may not even mention “asherah.” I cannot see this as strong evidence for a case of divinely wedded bliss.