I’ve never been a fan of organized sports. Call it sour grapes, but having been born with an inner ear affliction that makes sudden turns debilitating, I’ve never been effective at much beyond running. Maybe also the occasional flirtation with free weights. So when my wife showed me a story about Tim Tebow, I had no idea who he was. It turns out that he is the quarterback for the Denver Broncos. He was in the news not because of his apparently lackluster performance, but because of his religion. The Miami Herald story by Dan Le Batard insightfully points out that football fans participate in what amounts to a religion in their devotion to the game. Add an evangelical Christianity to that “sports religion” (Le Batard’s term) and a “holy war” (again, Le Batard) breaks out. Religious fans praise Tebow because of his character, sports fans castigate his allegedly mediocre ability. The controversy over Tebow, however, goes deeper. 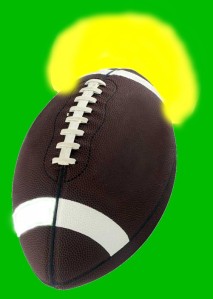 Hallowed be thy game (but not thy Photoshop)

Home schooled in Florida, his family took advantages of laws that allowed home schoolers to play on actual schools’ sports teams. Even going as far as to rent an apartment and move out of their home with her son, his mother placed her son in advantageous school districts while teaching him at home. The problems with home schooling are legion, but clearly among the most troubling are the frequent use of religious indoctrination and the lack of critical thinking skills. Those who are truly educated are aware of just how little they know. Those who presume they can teach their children everything they’ll need often seem impressed by their own knowledge. But I digress. While in college Tebow’s penchant for painting Bible verses in his eye black led to the “Tebow Rule” that forbade messages in the paint. Interestingly, the Bible verses he scrawled on his game face received high numbers of Google hits during the games.

No doubt for many sports are a form of religious release. Le Batard suggests that football religion and traditional religion rest uneasily together. In a world where I might mention a particularly important Bible passage for students to read and most won’t bother, the flash of Proverbs 3:5-6 on a starry-eyed quarterback’s face will send fans page-thumbing the good book. Perhaps religions have been focusing their energies in the wrong places. If the various religions of the world formed football franchises and joined the ranks of the NFL, the benches, or pews, would be filled every Sunday. And it might also solve another perplexing problem: which religion is the correct one? They could be determined once and for all on Super Sunday.