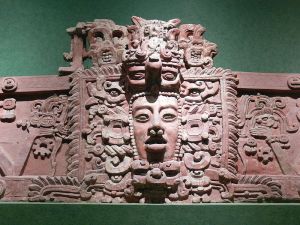 While an actual apocalypse for many turkeys ensued on Thursday, Fox News announced that a second reference to the Mayan apocalypse has been “admitted” by Mexican authorities. So I guess the world will end next year after all. And it figures, I just finally got a full-time job. For some reason, for all of our modern technology and scientific knowledge, many people still fear ancient “prophecies.” This remains true after countless failed apocalypses, two of them just this year proposed by Harold Camping in the name of the Almighty. People who trust the science of their cell phones—which, from any trip to the airport or bus station proves, humans are incapable of surviving without—nevertheless fear the “lost knowledge” of the ancients who believed myths were the most parsimonious means of comprehending a cold and uncaring universe. Yes, I’ll trust my entire life, finances, travel plans, social calendar, to a plastic box barely the size of a credit card. But if the Mayans said the world was going to end… these are the Mayans, after all! The Mayans!

Never mind that we know little about this antique people; we have had predicted ends to the universe from disaffected visionaries and disgruntled prophets ever since the Zoroastrians suggested this might not go on forever. And now that two predictions appear to coincide, it looks like its time to sell some stocks, cash in some IRAs and party like it’s 1999. When 2000 came in with its baleful symmetry, as some saw it, with events two millennia earlier, not many were dissuaded from the concept that never emerges. Doesn’t the book of 2 Peter state that the universe is reserved for a fiery destruction? Perhaps the Mayans had access to Holy Writ?

The fact is that most cultures concoct origin myths, stories of beginnings. The way the mind works, it is almost a necessary corollary to construct myths of the end as well. And somehow we trust that arcane knowledge on such matters is more accurate than the scientific scenario that, given the limited longevity of any single species, no humans are likely to be present when old Sol balloons out to be a red giant. Far more spectacular to suggest some ancient sage or savage saw it coming and grow anxious with the waiting. Strangely, many people seem ready to discard all the progress, the monuments, the essence of our humanity for the sake of ancient predictions. 2013 does not seem so far away. Many of us are planning to be here, even if they find an entire library of Mayan predictions. Perhaps the truest prophecy of all is that we, as humans, make our own future no matter what other humans have said in the past.