Once I found a baby bird blown from its nest. Many future priests had walked by already that morning, not even noticing. At first I thought it was dead, but then it lifted its head weakly and opened its beak in a soundless cry for its mother. Afraid to touch it, I pulled on some gloves, took it home and called the local animal rescue center. With my daughter keeping the chick warm in the backseat, we drove down the country roads hoping the little thing would survive at least long enough to get professional help. When the trees leafed out and the air warmed up that summer, I received a call from Animals in Need. The bird had survived and was ready for release—would I like to let it go near where I found it? They had worked hard to prevent habituation, and I brought the bird home in a paper grocery bag that it occasionally tested to see if it could find its way out. With my daughter, I opened the bag in the woods and the bird was gone in a flash. We barely saw it as it flew to freedom.

If I were a rich man, well, I guess I would run for president. Perhaps it was being overseas for a week, but the presidential race seemed to fall from the news with Santorum’s demise (if ever I believed in divine intervention, it was on the day he dropped out of the race). Of course, those in Britain who knew me wondered about the carnival characters running for the “most powerful man” job. So we’re now left with a very wealthy man who’s just like the rest of us. Ironically, I’ve been thinking about the Bible—an occupational hazard—and wondering when the ideal of Jesus’ teaching was forgotten in the haste to become the richest Christian on the block (or empire, as the case may be). The disconnect couldn’t be sharper between the man who said that if you wanted to please God you had to give all your material goods away and a man running for public servant has more money than the last eight presidents combined. And Reagan was no slouch on the financial end. Where your treasure is, there will be your heart also.

I can’t remember the last time I felt valued by a politician. At least the Democratic candidates attempt the lessen the suffering of the poor a little bit, but I still see people sleeping in the streets. The roller coaster that is the economy demonstrates its unfeeling course as some get rich then plunge to the depths only to soar out of them again into sunny spaces. According to the Gospels, Jesus said not a sparrow falls to the ground without God knowing it. Apparently that little bird I was privileged to rescue was part of the divine plan. That guy sleeping on the subway grate over there trying to keep warm? Well, the politicians apparently can’t see him, and I wonder if the God who watches the sparrows has noticed either. 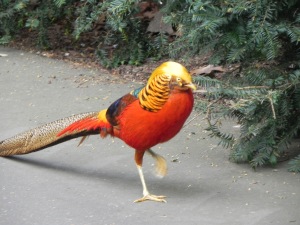 Not a sparrow (golden pheasant)