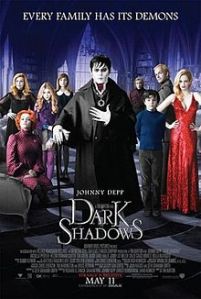 It took a few weeks and five states, but I finally got to see Dark Shadows. Although I’d seen the trailers, there was quite a bit over which I remained in the dark. After all, the television series ran daily for several years and the story of Barnabas Collins was never really resolved, to the best of my knowledge. Trying to fit all of that into a couple hours of cost-intensive Hollywood showmanship would be a tall order. I have come to trust the Burton-Depp collaboration, however, and I had read some time ago that Johnny Depp had wanted to be Barnabas Collins when he was growing up. It is difficult nevertheless to resurrect a vampire after some three-and-a-half decades of slumber. Speaking with some friends after the movie I discovered that I was not the only child discouraged from watching Dark Shadows after school as a child. But watch I did.

Barnabas Collins became a monster as the result of a curse. The series—which I remember principally as a series of impressions and images—and the movie make that clear. The man who has lost control of his own fate is a reluctant monster. An aristocrat who lives by draining the blood of the common folk. Despite the humor and carnality of the movie, social commentary is there. Sometimes buried in an iron coffin, and sometimes in a vintage VW bus from the early ‘70’s. It may not appear full blown on the big screen but it pulses through the veins nevertheless. Barnabas Collins is a reluctant and conflicted vampire, but he does kill others to survive.

Why would a kid raised in a religious setting be so drawn to a creature of evil? Perhaps it was because Barnabas was the ultimate penitent. He had to victimize others, but he always regretted doing so. Like any living (or undead) creature, his nature compels him to survive. He is sad about his lot in the world, but is helpless to change it. Like many children of the monster generation I was nourished by a long series of movies featuring impossible creatures, including vampires. The earliest vampire I knew, however, was Barnabas Collins. Although Bram Stoker had set the type nearly a century earlier, my measure of the vampire was the reluctant denizen of Collinwood. Although I read my Bible dutifully, and never missed church, I still found the plight of this lonely monster compelling. The movie may not live up to the standard of all Dark Shadows aficionados, but if it brings a subtlety of moral ambiguity to a generation of absurdly self-assured modern-day fundamentalist children, the curse of Barnabas Collins may really be a blessing in disguise.