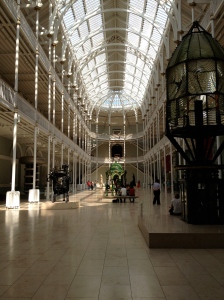 The National Museum of Scotland, like many museums in the British Isles, is free to visitors. Such museums are repositories of national pride and provide a sense of the scope of a nation’s history. While penurious grad students (as opposed to plain penurious, as best describes those long unemployed), my wife and I would wander over to Chalmers Street and pop in for an hour or two of inexpensive culture. During the last minutes of my recent trip to Scotland, I ducked into the newly—well, it has been nearly two decades, I have to admit—expanded museum for a gander. I was naturally drawn to the history of Scotland section—you can see dinosaurs and robots in the US, after all—and was struck at how very religious it was. 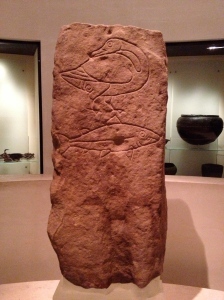 It’s not that the Scots are any more pious than other peoples, but it is the nature of religious artifacts to receive special treatment, and therefore, to survive time’s greedy decay. No one dares to anger the gods. Beginning with the Stone Age Picts, and flowing through contact with the Romans and eventually to the Celtic culture now associated with Scotland, religion is obviously preserved. Prehistoric Picts, by definition, didn’t leave written accounts of their religion, but the treatment of special artifacts in a gritty, harsh world shows where social values were to be found. Christianization, with its apocalyptic earnestness, only accelerated the process. Celtic crosses, case after case of precious metal sacramental artifacts, and a large display of the Reformation denominated the more secular displays, or so it seemed. (The working steam engines and large looms, however, gainsay a bit of my enthusiasm. And swords seemed to be everywhere.)

While there is a genetic base for some sense of nationhood, it is not unusual to hear a person of African or Indian heritage speaking with the familiar Scottish brogue. Surely they are Scottish too. Culture clearly ties disparate peoples together into a “nationality.” In this museum that reaches back to the dinosaurs and beyond, a great deal of the history involves people of similar ancestry who come into contact repeatedly with those of other heritages. What gets left behind after those encounters, when it’s not swords, is religious. The religions themselves then clash, fracturing into a new stage of cultural development. Even in today’s secular Europe, some of the most notable buildings are the cathedrals. And in its own way, the National Museum of Scotland is a cathedral to all who wish to understand what makes us human.